Editor’s note: Find out how the team fared in this complete report: No Easy Task: Record Set from San Francisco to Long Beach

Looking to smash the existing world record from San Francisco to Los Angeles (and San Francisco to Long Beach) in a powerboat, Bob Russell will be taking off tomorrow morning alongside John Rogers in his 51-foot Outerlimits Powerboats catamaran. The crew will be leaving the San Francisco Yacht Club around 7 a.m. on Wednesday morning with the goal of establishing the Marani Cup (SF to LA) and Marani Bell (SF to LB)  world records. 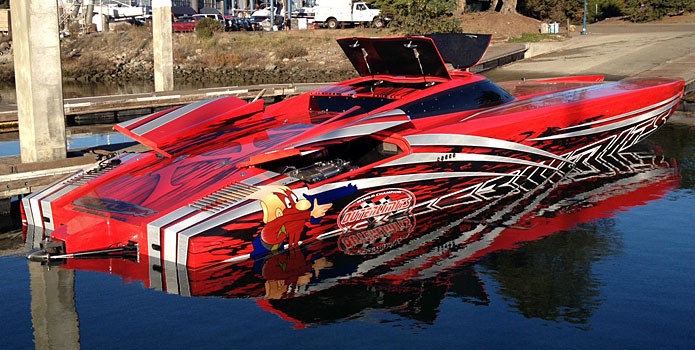 Bob Russel’s 51-foot Outerlimits catamaran is in the water at the San Francisco Yacht Club ready for tomorrow’s record attempt.

The team is hoping to complete the 400-plus-mile Pacific Ocean journey and be docked in Long Beach (after a pit stop in Marina del Rey to set the SF to LA record) less than five hours later. The record attempt is being sanctioned by the American Power Boat Association and produced by Ross Wallach of RPM Racing Enterprises.

Russell, who is from Seattle, and Rogers, who lives in Newport Beach, Calif., have been waiting for a good weather window for some time, and they believe they’ve found one tomorrow that will allow them to run the canopied catamaran, which is powered by twin 1,550-hp engines from Sterling Performance, at an average speed of 100 mph or more.

Crew chief Jeff Murray got the call on Monday morning that the attempt was “a go” so he hauled the boat, which was in Southern California, up to the Bay Area and had it in the water with a new set of 16.8×37 five-blade propellers with 18-degree rake from Hering Propellers ready for tomorrow. You can follow the team, which goes by Outlaw Offshore Racing, online at gps.motionx.com/iphone/liveupdates by entering channel #51562 and monitoring the “Jr. Outlaw” icon.

A different gasoline-powered mark is held by the legendary Bob Nordskog, who completed the run from San Francisco to Marina del Rey in 1998 in 5 hours and 57 minutes, which bested the diesel-powered record that was set by Chuck Norris in the same year. Earlier this year, the four-man team of Andy Hindley, Nigel Hook, Dan MacNamara and Lance Ware established the Lucas Oil Ocean Cup – Golden Gate to Queen Mary record in 9 hours and 50 minutes after experiencing mechanical issues along the way (read the story).

Speedonthewater.com will provide a complete update after tomorrow’s record attempt.