Just one week ago today, Tim and Cyndee Hill took a moment to exhale from the months of work it took to organize Roar Offshore Fort Myers Beach, the final event in the American Power Boat Association Offshore National Championship Series. But the moment passed quickly and by Monday morning they were back in full-throttle organizer mode and putting the final touches on this weekend’s Roar Offshore Poker Run.

And now, with 41 poker-run boats safely returned—or on the way—to their respective homes and approximately $10,000 raised for the Fort Myers Beach Lion’s Club, the Southwest Florida couple is enjoying a much-longer, well-earned moment at the Westin Cape Coral Resort, the host venue for the weekend’s action.

“We’re in the pool at the Westin playing Euchre with friends,” Tim Hill said, then laughed, during a telephone interview this morning. “The poker run was great, but maybe back-to-back weekend events wasn’t such a great idea. We feel like we have a great weight lifted off our shoulders.

“We’re going to do the poker run again next year,” he added, then chuckled again. “But we’re also going to move it to April.”

For participants Amanda and Don Gardner of Cape Coral and Bill and Patience Forenski, who live in Delaware but have a second home in the area, the event provided the opportunity to run a couple of “new” boats. The Gardners recently competed a restoration and outboard-engine conversion for a 36-foot Skater Powerboats catamaran built in 2005 and the event was just their second outing in the boat.

“We couldn’t be any happier with it,” said Amanda Gardener, a Fort Myers Offshore organization board member. “We still need to do some setup work but we love this boat.”

Check out the slideshow above for more action from the second-year Roar Offshore Poker Run, which will return in April 2022.

“My friend Bill Buchanon ran Absolut Madness—our 27-foot Avalon pontoon—for me and we ran our new MTI,” said Bill Forenski, who owns Delaware-based WMF Watercraft and Marine, one of the sponsors (as was Avalon pontoons) for the back-to-back weekend happenings. “It was a great event and the water was perfect.”

Even when he purchased his 34-foot MTI cat, Forenski’s goal was to step up to its larger sibling. Now that he has he couldn’t be happier with the move.

“I wanted something bigger to run around here, and I love it,” he said. “The ride is really nice and I like the seating configuration—the 390 has eight seats.”

During last night’s poker-run awards celebration, Tim and Cyndee Hill rose for a raucous standing ovation for their efforts. The months of work were behind them and at last they could relax.

It was an emotional moment for the couple.

“This has consumed us,” said Tim Hill, his voice breaking with emotion. “We pretty much knew everybody in the room last night, and we thanked them for supporting and not giving up on us.”

Bill and Patience Forenski enjoyed the day with friends in their MTI 390X powered by Mercury Racing 450R outboard engines and formerly owned by Shaun Torrente. 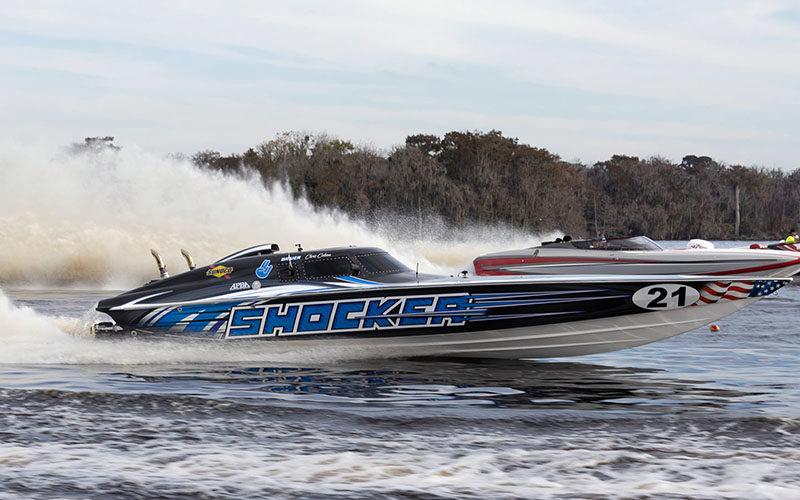