Your go-to source for performance boating.
HomeIn the NewsRoar at The Shore: Is ‘Big Time’ Offshore Racing Back In Atlantic City?

Roar at The Shore: Is ‘Big Time’ Offshore Racing Back In Atlantic City?

Roar at The Shore: Is ‘Big Time’ Offshore Racing Back In Atlantic City?

The three-day Atlantic City Festival of Speed culminated with exciting, lead-swapping, air-grabbing offshore boat racing last Sunday, but the real story isn’t so much the race results as it is the impact the weekend of high-speed hardware may have had on the future of the sport through a first-rate example of how cities and race promoters working together can deliver high-quality, high-performance entertainment and a boost to the local economy. 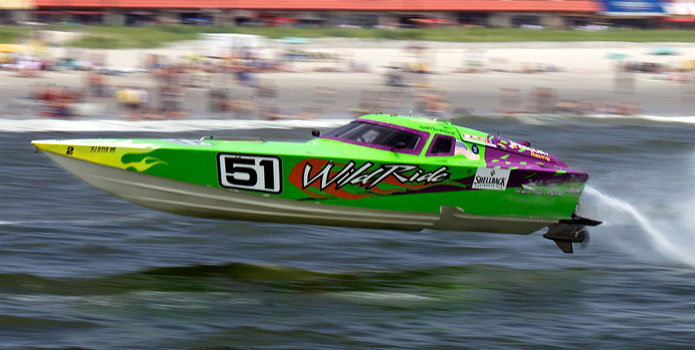 The Jersey Shore suffered badly from Hurricane Sandy, but Atlantic City itself faired far better than the impression the rest of the country may have from news coverage of the storm. Tourism numbers are down and it frustrates local officials who believe people are staying away because they think the Boardwalk and seaside attractions were wiped out. To be sure, the storm was devastating to many, but even those not affect by the storm’s direct impact are feeling the economic pinch with the decline in visitors.

A close battle between Miss GEICO and Cintron ended with Cintron taking the win.

Working together the three groups approach the Golden Nugget Casino, the Atlantic City Alliance, and the Miss Geico Offshore Race Team with a plan to recapture those glory days.

The Bigger Picture
The 16th annual NJPPC Atlantic City Poker Run kicked the weekend off with 35 boats from 29 to 51 feet making the one-hour run “down the shore,” followed by a lavish racer reception Friday night. Club members spent Saturday providing boat rides to injured military veterans and their families through the Wounded Warrior Project while a car show featuring everything from rat rods to Ferraris lined the street outside the Golden Nugget Marina, with a reception honoring the vets that night. OPA and NJOPRA pulled out all the stops to organize a first-class race with 36 boats in eight classes.

Close to the beach action made for great spectating.

Tom Pohlman, Executive Vice President of the Golden Nugget ponied up $5,000 cash to be raffled off among racers who met an early registration deadline, completed at least one lap of the race, demonstrated “Jersey Strong” spirit, and stayed through the entire weekend. He also got other casinos involved and through the Atlantic City Alliance and Geico Insurance threw an unprecedented $200,000 into promoting the weekend from Baltimore to New York.

And the results speak for themselves. Tens of thousands of people lined the beaches. The historic Steel Pier set a record attendance for a Sunday afternoon in June, and The Mall at Caesar’s Pier had to turn people away, having maxed out its capacity.

Sunday’s Action
But we can’t ignore the racing, which was excellent. A few highlights include a scary crash between Super Vee Lite boats Wild Ride Racing and Pirate Racing, sending the latter’s Travis Denham to the hospital with minor injuries, which were treated in time for him to return for the awards ceremony. Johnny and Jason Saris took their Class 400 Saris Racing to a checkered flag after pulling an all-nighter to rig the boat, but leaving absolutely no time for any testing.

In Extreme Class, it was a battle between two Mystic-built powerhouses Miss GEICO and Cintron. The two swapped the lead over three laps, before the GEICO boat, powered by Mercury Racing 1650s began pulling away from the entire fleet. But on the back straight away, Miss GEICO lost a drive and appeared to spin, retiring from the race and handing victory to High Fuller and Rich Wyatt.

Miss GEICO’s Gary Goodell, who was instrumental in raising the money to make the weekend happen, was philosophical.

“What are you going to do, that’s racing,” he said, adding “but did you see how she was pulling away? Boy those motors are sweet!”

In a casual conversation following the racing, Festival of Speed chairman and NJPPC president Dave Patnaude said, “The weekend could not have come together any better than it did. The weather, the racing, the crowds; we had an absolutely magnificent, world-class event,”

That prompted Golden Nugget’s Pohlman to ask, “How do we make it bigger next year?”

The key players have their work cut out for them, that’s for sure. But based on their success last weekend, they’re certainly up to the task.