A little more than two years ago, speedonthewater.com published a feature called “Restoration Project: Bertram Competition 38′“. In that story, we chronicled the work Kurt Groom, the owner of the 1975-built sportboat, did to restore his vintage 38-footer. The results were impressive and stunning. 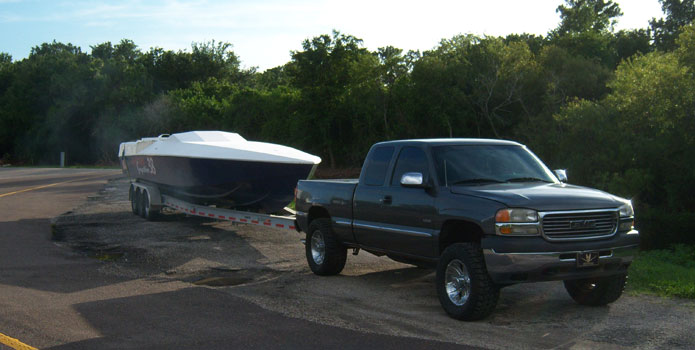 Groom is hoping to complete the latest phase of his project and be back on the water by November.

Turns out that Groom, who lives in DeLand, Fla., wasn’t finished—not even close. About six months ago, he decided to completely update and renovate the boat’s faring and dash, and expand its interior to seat five. To raise and widen the boat’s faring, Groom turned to Will Smith of Phantom Boats in Sarasota, Fla.

“Will did all the fiberglass work on the faring and dash, and he reinforced the deck,” said Groom. “We are moving all the gauges, the steering wheel and the throttles and shifters to the right side of the dash—as you recall they were in the center of the dash.”

Seat mock-ups for the revised cockpit were created by PPI.

To update the 38-footers’s interior, Groom tapped the skills of Premiere Performance Interiors, also in Sarasota. At present, the company is building him a pair of wood-free bolsters with drop-out bottoms for the driver and copilot, and sculpting a new wood-free, three-person bench aft of the bolsters. Groom delivered the boat to Sarasota so Smith could tackle his part of the project and PPI could take measurements and design the seating.

For Groom, who will install the interior himself and plans to have the project completed in November, most of the work is still ahead.

“I have to install and rewire all the gauges, install the new GPS, and plumb the power steering,” he explained. “When the interior arrives, I have to install it—PPI already drilled the holes for it already so it should all fall into place fairly easily. They also custom-fabricated the frames for the bolsters and the bench. I can’t tell you want an impressive place that is. We must have looked at 200 seat designs.”

Will Smith of Phantom Boats raised and widened the 38-footer’s faring.

Groom also said he is replacing all the boat’s raised hardware, from its old cleats to its center deck rail. To that end, he has purchased retractable cleats and a retractable navigation light.

“All the toe-catchers are going to be gone,” he said, and then laughed.

While Groom has a substantial amount of labor ahead of him, he’s already thinking about his next move—a power move—for his pride and joy.