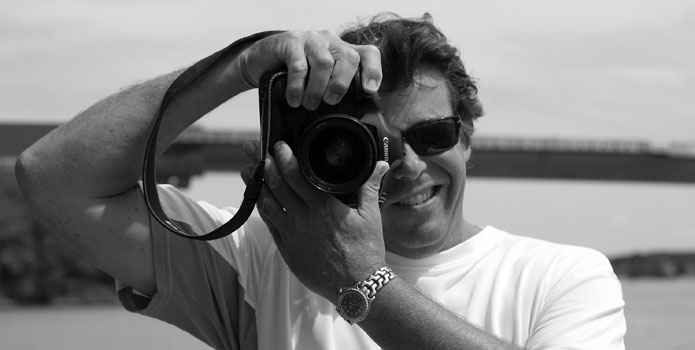 The late Tom Newby was remembered in this year’s 25th anniversary Lake of the Ozarks Shootout program.

It’s hard to believe it was six years ago today that Powerboat magazine photographer Tom Newby—our good friend—died in a helicopter accident. While Matt Trulio or myself (along with so many others) will never forget Newby, it’s still nice to recognize him each year on the anniversary of his passing.

Fortunately the publishers of this year’s Lake of the Ozarks Shootout program wanted to make sure others remembered Newby while celebrating the event’s 25th anniversary, so they asked me to contribute a story for the 200-plus-page program. The following is the “Shooting the Shootout” piece I had the honor of writing.

I don’t know for certain if the Lake of the Ozarks Shootout was Powerboat magazine photographer Tom Newby’s favorite event to cover, but it was definitely at the top of his list thanks to the people, the places and the sheer number of boats—both spectator and race—on the expansive lake.

So, in a way, it was fitting that the 2007 Shootout was the last event Newby ever covered for the magazine. Over the years, Powerboat received a lot of credit for putting the Shootout on the map nationally. Among the biggest reasons for that were the outstanding pictures that came from the Southern California photographer’s remarkable eye for capturing high-performance boats.

He shot almost all the performance boat evaluations and boat races from coast to coast—and even internationally—for the magazine. If at any time between the mid-90s and 2007 you picked up a copy of the publication, which sadly ceased production in December 2011 after 40-plus years in business, chances are Newby took the cover photo.

Newby was doing exactly that when he died in a helicopter crash on Sept. 11, 2007 in Sarasota, Fla., during a Powerboat boat test photo shoot. It’s a day I will never forget and one I think about often.

Obviously I’m not the only one. My former colleagues at Powerboat and I talk about him regularly. And of course, his close friends and family in and around the Manhattan Beach community he grew up in miss him dearly. He left behind two boys, Weston and William, who were only 12 and 9 in 2007.

Then there’s Newby’s extended family on the water. Take the boaters who met him when he asked to take a photo of their poker run crew at a lunch stop in Houston, New York or Chicago. Or the racers who marveled as Newby flew closely overhead during the offshore racing world championships in Key West, Fla., year after year.

From industry notables such as Cigarette Racing Team owner Skip Braver and Eliminator Boats founder Bob Leach to world champion offshore racer Dave Scott and the legendary Reggie Fountain, the list of Newby’s friends in the business was long.

One person in particular—much closer to home in regard to the Shootout—was Jeff Dorhauer, fire chief of the Osage Beach Fire Protection District. Over the years, Newby got to know Dorhauer and his wife, Diana, very well as they led the event’s organizational efforts when it took place at Shooters 21. In fact, the Dorhauers have a memorial to him in their home that includes one of Diana’s cameras signed by Newby along with some photos of him covering the Shootout.

Another comrade from the many days sitting in the photo boat along the course was official Shootout photographer George Denny. I remember speaking with Denny a few days after Newby died. Denny was devastated by the news and immediately offered any and all photos he had taken of him throughout the years for Powerboat‘s special memorial issue. It was clear that Denny appreciated Newby’s advice and his company on the photo boat. He wasn’t the only one.

It was on the photo boat where Newby introduced me to an over/under game to make the top-speed runs that much more interesting. As each boat sped down the course, one of us would call out what we thought the top speed was. Then, before the speed was announced on the radio, the others would have to choose over or under. Guessing the exact speed was uncommon, but it did happen—and more often than not it was Newby making the call.

One year we decided to try the over/under game at the Powerboat booth on the Shooters 21 property. For some reason it wasn’t nearly as much fun as being on the boat. It didn’t take me long to figure out what was missing—Newby.

I know I speak for my associates in the business, my former Powerboat colleagues and the thousands of boaters whose lives were touched by Newby in some capacity, when I say, “We miss ya Tom!”

I also know Newby will be watching over the Shootout this year—there’s no way he’d miss the 25th anniversary party of one of his favorite events.