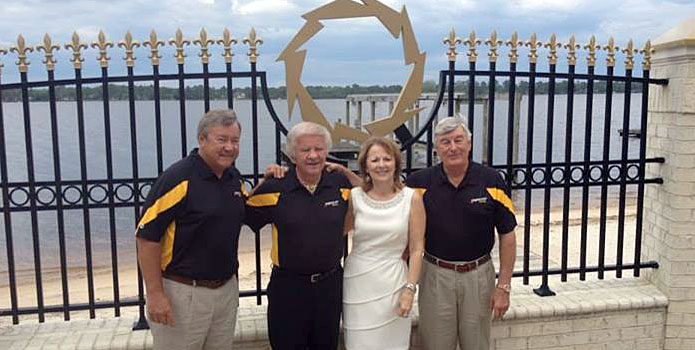 From left: Earl Bentz, Reggie Fountain and Bill Seebold reunited a few months ago for the filming of the “King of Offshore” documentary to discuss their time driving for the Mercury factory outboard tunnel boat racing team.

In our world of go-fast powerboats, no one will argue that Reggie Fountain isn’t one of the most iconic public figures the sport has ever seen—if not the most. That’s exactly why John Potts of American Performance Media took on the task of writing and directing his latest documentary, “King of Offshore: The Reggie Fountain Story.”

The one-hour documentary, which is scheduled for web streaming in the fall and broadcast on a major cable sports network in 2014, follows the legendary boat builder and racer from his adolescent days chasing boats on North Carolina’s Tar River through his tunnel boat championship seasons with the Mercury Racing team. The story unfolds as Fountain builds a global powerboat empire with his name-brand boats winning hundreds of world titles in offshore racing and tournament fishing.

Potts, who has received two Emmy Awards for previous documentaries on NASCAR legends Richard Petty and Bill Elliot, sent speedonthewater.com the one-minute trailer, which definitely gets your heart racing. Click on the video below to watch.

“While many entrepreneurs have advanced technologies in high-performance boating, Reggie’s revolutionary hull designs and hydrodynamic theories continue to impact the sport to this day,” said Potts, whose company specializes in advanced motorsports marketing, including traditional television broadcasting and new digital media applications from live internet streaming to video web design and more. “Whether you’re a boating enthusiast or enjoy American biographies, ‘King of Offshore’ delivers one of the most compelling stories on the legacy of high-performance boating.”

There’s sure to be a lot of standard Fountain quotes, such as his “We wanted to build the fastest, safest, smoothest, best-handling boats in the world,” but Potts said the program actually shows a humble side of Fountain that reaches beyond the boisterous persona that graced magazine covers and hoisted race trophies for decades.