Dubbed the Gateway Marathon, the American Power Boat Association-sanctioned Ocean Cup endurance run between Palm Beach, Fla., and Freeport, Grand Bahama, could have as many as six entries if all teams planning to compete actually make it to the Thursday, June 2, event. Among the boats slated to be part of the fleet in the 100-mile, Atlantic Ocean run are two South Florida-based Cigarette 515 sportboats, one piloted by Pete Riviero of The Firm Realty Group offshore racing team and another driven by Tommy Hoffstetter of Chief Marine Group.

Spearheaded by the Lucas Oil/E3 offshore racing team, the 2022 Ocean Cup Series is looking at a strong start next month with its Gateway Cup event. Photo from the 2021 APBA/UIM Offshore World Championships by Pete Boden copyright Shoot 2 Thrill Pix.

According to Ocean Cup Series representative Janet Wilson, the run has been reformatted as a one-way world record attempt.

“On Friday (June 3), the day after the Gateway Marathon event, the teams will celebrate the Bahamian Labor Day and then as a group fun-run head back to Palm Beach on Saturday,” said Wilson. “Maybe we will stop at the West End (of Grand Bahama) for breakfast.”

The Cigarette V-bottom teams will be joining Nigel Hook and Jay Johnson, who have been spearheading the Ocean Cup Series with Wilson, in Lucas Oil/E3, a 52-foot Mystic Powerboats catamaran.

According to Wilson, three other teams have expressed strong interest in the event and will compete if they can overcome their respective equipment hurdles. Andy Copeland of Oklahoma is hoping to have his Skater-built 40-foot Fountain V-bottom dubbed Copeland’s/Raymarine ready in time for the run—he’s currently waiting on parts. So, too, is Pennsylvania’s Rich Wyatt, another 52-foot Mystic owner, as well as the Florida-based Wheels/Rollin Vengeance team headed by Rick Bieluwka. Like Copeland’s, those teams also are waiting on parts.

Registration remains open. Said Wilson, “We are still looking for a center console to join the fleet.”

The Gateway Marathon is the first of four events in the 2022 Ocean Cup Series. It will be followed by the Great Race in Trinidad and Tobago August 21, the Around-Catalina Run from Huntington Beach, Calif, hosted by the Pacific Air Show, on September 30 and the San Francisco-To-Long Beach Run on October 22. 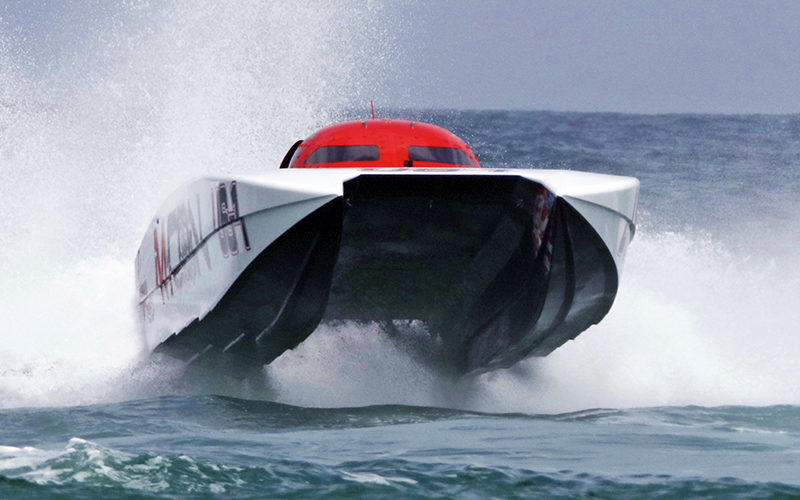