If you happen to be on Lake Havasu in Arizona this weekend for the River Dave’s Place All Boats Regatta, you may get a glimpse of a new fiery red DCB Performance Boats M37R Widebody open-bow catamaran equipped with twin Mercury Racing 450R outboard engines mounted on Shaun Torrente Racing brackets. The second 37-footer with an open bow from the El Cajon, Calif., company, the cat is hull No. 14 of 31 full-tunnel beauties ordered to date.

David Dginguerian piloted his new DCB M37R Widebody yesterday for the first time—and he can’t wait to get his family on board. Photos courtesy Jeff Johnston copyright DCB Performance Boats

A property-flipping entrepreneur who lives in Santa Clarita, Calif., with his wife, Amy, and their twin 13-year-olds, Levi and Madison, owner David Dginguerian is registered for the weekend-long RDP happening. Although work commitments for his business will force him to depart for home after he gets “a little more seat time” this morning, Dginguerian, who took delivery of the cat yesterday from DCB’s Tony Chiaramonte and owns a second home in Lake Havasu City, will be back October 6-7 for the annual DCB Regatta.

“I have been boating on Lake Havasu for more than 20 years and I have wanted a boat like this forever,” said the 53-year-old Dginguerian, whose most recent boat was a 27-foot Ultra Shadow. “Yesterday with Tony, and the boat itself, exceeded my expectations. I have never owned a boat with a true tunnel, and I love it.”

Enjoy more images of the 37-footer in the slideshow above.

Dginguerian first had his sights set on an open-bow 35-footer from DCB, but company president Jeff Johnston encouraged him to consider an M37R. Taking inspiration from his friend Mauricio Vivanco, who owns an open-bow DCB M44 Widebody catamaran with an open seating area up front, Dginguerian pulled the trigger on a 37-footer with a similar setup.

“Our kids are with us like 90 percent of the time,” he said, then chuckled. “So I made an executive family decision and ordered the M37R with an open bow.”

“This is only the second one we’ve built and we don’t expect to do a lot of them,” Johnston said. “But it came out beautiful, runs great and our customer loves it. That’s what he wanted and that’s what he got.”

In its first test session, Chiaramonte ran the boat, which is heavier up front thanks to an array of speakers and lounges in the dedicated open-bow area, to 121 mph. (Unlike the first M37R built with an open bow, Dginguerian’s cat does not have a hard cover for the forward seating area when it’s not in use.) With five-blade Mercury Racing 34-inch-pitch propellers at the business end of the 450R outboards, the lighter and more-aerodynamic version tops out at 124 mph, according to the longtime DCB company owners-group member.

“We just chose propellers with a slightly higher rake angle to help carry the extra weight up front,” Chiaramonte explained. “I won’t say I was ‘pleasantly surprised’ because I expected it to run well, but it went really, really well.”

Dginguerian worked closely with Johnston throughout the 20-month build process—and said he enjoyed every minute of it.

“It was so much fun,” he said. “You think, ‘Wow, 20 months is a long time,’ but once they start the build, things move along quickly. I only visited DCB once during the build, but every department really impressed me. Everyone at DCB does excellent work. Everyone there is so patient.

“And working with Jeff Johnston was amazing,” he continued. “If I asked him a question, he responded immediately with a detailed answer.”

In a nod to his business and immediate loved ones, Dginguerian named the cat Family Flippers. And he’ll introduce it to his family following the DCB Regatta.

Family Flipper is the fourteenth M37R Widebody catamaran DCB has delivered to date.

New SC 37 Catamaran To Be Part Of Outerlimits Trifecta For I... 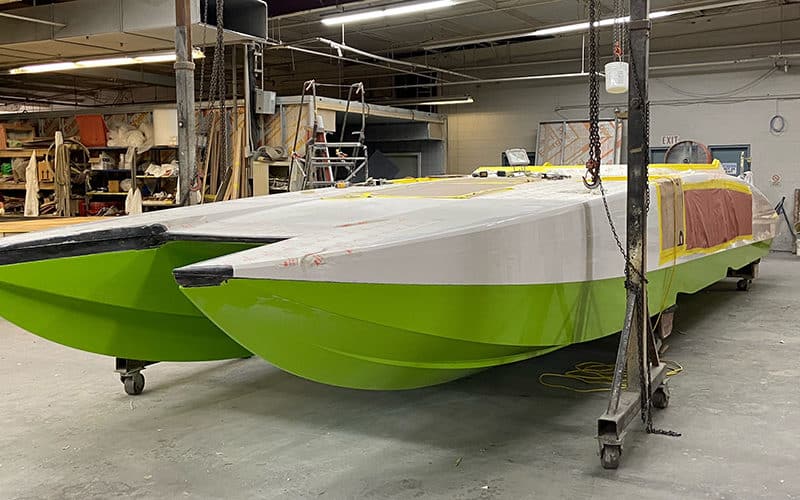