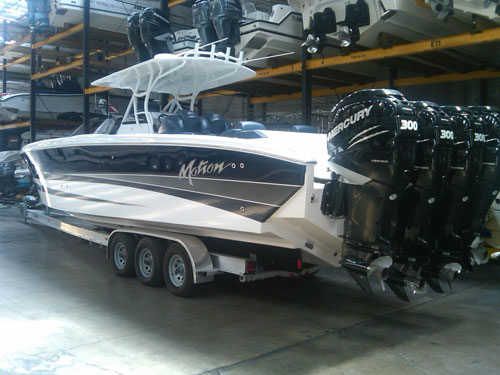 One of two 42′ Motion center consoles at TNT Custom Marine.

Sea trials of a 42’ Motion center console with four 300-hp Mercury Verado outboard engines should begin later this week, according to John Tomlinson of TNT Custom Marine in Miami. TNT did the engine installation, rigging and finish work on the 42-footer, as well as rigging work on another 42’ Motion. (The builder installed the engines on that model.)

“It was a really extensive rigging and wiring job,” said Tomlinson. “I think the boat has something like 11 batteries. We also did all the electronics installation.”

Tomlinson, who plans to leave for the Lake of the Ozarks Shootout tomorrow where he will run a 48-foot Marine Technology, Inc., racing catamaran, said the 42-footer should top 72 mph.

“One of my guys will have to run it for the first time while I’m gone, unless something changes and I can go to the Shootout a day later,” said Tomlinson.