Italian driver Alex Carella held off a handful of world champions and survived a pair of restarts on Friday to earn his sixth career victory at the 21st Grand Prix of Abu Dhabi—the fifth stop for the Union Internationale Motonautique (UIM) F1 H2O World Championship. 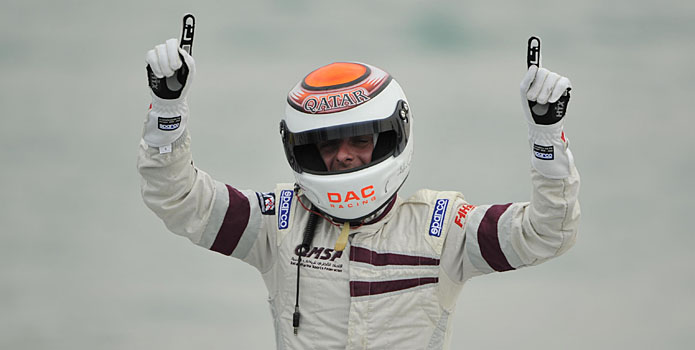 Carella’s win also clinched the overall points championship for himself and the Qatar Team for the second straight season. Even more impressive is that he clinched the title with one race to go. The team are headed to Sharjah, United Arab Emirates (UAE) for this Friday’s (December 7) Grand Prix of UAE, the sixth and final round of the series.

“My crew had my boat set up perfectly and I needed that to happen since I had such a talented crew of drivers chasing me for 32 laps,” Carella said. “Thani Al-Qamzi pushed me to the max and actually got past me for a moment before I was able to pass him again on the front straightaway and take back the first position.

“I’m truly thankful to everyone on the Qatar Team for their hard work and dedication to get me to this place,” he continued. “Now that the championship is over for the year we can enjoy the evening and get ready for the final race next Friday in Sharjah.”

With Carella leading from the start of a race that had already been halted by two yellow flag situations, race officials decided to stop the race for good with eight laps remaining following an incident which damaged two of the course turn buoys. With insufficient time remaining to repair the course, the race finished under a third yellow flag. Although no one could deny that the Qatar Team and Carella deserved another world title—the third one for the Qatar Marine Sports Federation team in five years.