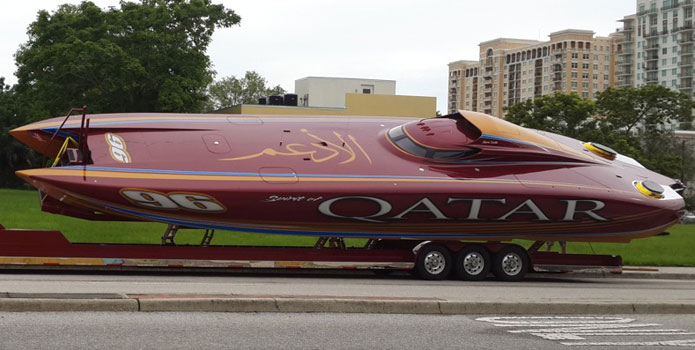 If all goes to plan, Qatar’s 50-foot Mystic catamaran will compete at the SBI New York City race in early September.

While the team’s primary goal from the start of its turbine-cat project was to earn a title at the 2013 SBI Key West Offshore Championships in November, Sheik Hassan, Curtis and the rest of the Qatar outfit had hoped to debut the boat earlier this season. Final setup details and a few mechanical gremlins have postponed the 50-footer’s unveiling on the racecourse, but Curtis believes those issues are behind them.

Marc Granet of the Miss GEICO Offshore Racing team, which until this year ran turbine engines its raceboats, said the Qatar team’s delays are understandable. “You don’t just throw one of these boats together,” he said. “Getting a turbine program together takes time. It’s not easy.”

Curtis also confirmed that the Qatar team plans to compete in the Lake of the Ozarks Shootout in 2014. (The 2013 event concluded yesterday.) For special events—including a planned kilo-record attempt in Qatar next year—the team has a pair of 3,000-hp T-55 turbine engines for the cat.