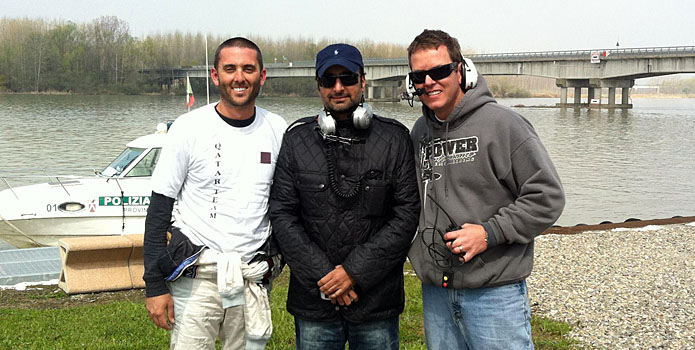 After a day of testing in Italy, Qatar Team driver Shaun Torrente, QMSF’s Khalid bin Arhama Al-Kuwari and crew chief Brendan Power talked strategy before the F1 H2O opener in Brazil.The team likes its chances heading into the season’s first race in Brazil on June 2. Carella won last year’s world title for the second year in a row by the margin of 17 points to give the QMSF-supported team a third world title in five years. Torrente proved that he was one of the fastest drivers on the F1 circuit, but a license suspension (see: UIM Withdraws Torrente’s License After Crash in China) ruined his chances of winning the last two races and he finished the season 11th overall.

“After such a long layoff before the first race in Brazil in June, it was important that we got some testing in to dust off the cobwebs,” Al-Kuwari said in a press release. “We tested some new propellers and engines. It was a good chance for the team to work together again and get in shape before the season begins. We learned many new things and that information will be critical when the racing starts.”

Currently, F1 H2O has a provisional eight-race calendar with the teams venturing to the Brazilian capital of Brasilia for the first time for the opening race. From there, the calendar takes crews to the Ukraine, Russia, China, Qatar and the United Arab Emirates.