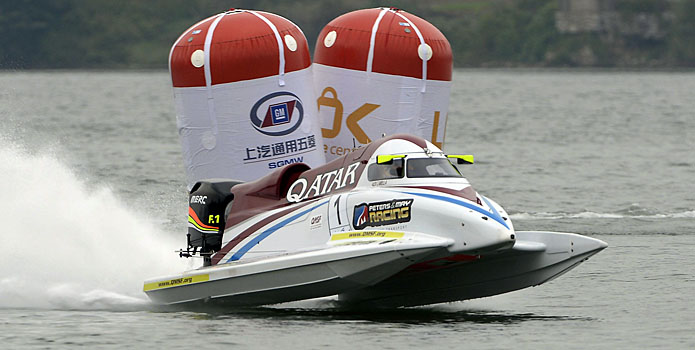 Italy’s Carella, who has won the last two F1 H2O world titles, completed a start-to-finish victory at the 19th annual Grand Prix of China, while his American teammate, who came into the race atop the points standings, battled electrical problems and managed to hold onto sixth place.

A disappointed Torrente, who was unable to overcome Sweden’s Jonas Andersson for fifth place in a battle that lasted for more than 10 laps, said he suffered an electrical issue when something got wet about a third of the way into the race and shut down the boat a couple of times. Immediately dropping from second place, Torrente quickly fell more than 30 seconds behind and continued to struggle with the problem for the remainder of the race.

“It’s hard to pass any boats if you can’t get wet,” said Torrente, who was noticeably frustrated in the F1 H2O live video stream after taking sixth in what he called “a first-place boat.” The finish marked the first time in the six races he’s completed that Torrente didn’t finish in the top five.

Keeping pace with Carella for most of the race was second-place and third-place finishers Sam Selio of Finland and Phillipe Chiappe of France, although Selio, who is now tied with Carella atop the points standings with 44 points, couldn’t ever get much closer than two seconds behind Carella, who earned his first 2013 victory. Chiappe is third overall with 39 points and Torrente is fourth with 35 points.

Unfortunately American driver Terry Rinker, who was racing with Team Azerbaijan in a boat he drove for the first time this week, broke down with eight laps to go and finished 12th overall.