The Qatar Team’s Alex Carella and Shaun Torrente will start what promises to be an enthralling 15th Grand Prix of Sharjah from pole and second positions after an entertaining qualifying session on Khalid Lagoon in Sharjah, UAE, on Thursday afternoon. 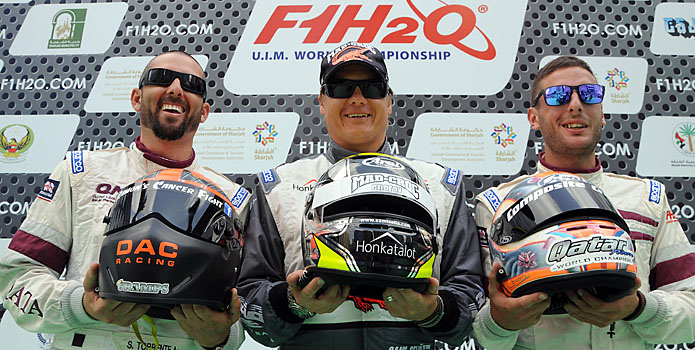 Both drivers face a winner-take-all situation in Friday’s race— the final round of the 2013 Union Internationale Motonautique F1 H2O World Championship—but their task was made a little easier when championship leader Sami Selio of Finland flipped his boat in the second qualifying session and was not able to take part in the six-boat shootout.

His demise also meant that Carella clinched the UM F1 H2O Pole Position Championship. Frenchman Phillipe Chiappe, who is fourth in the title race, will start the season finale race from third position.

“We have a 1-2 to start the race—Alex and Shaun know that they need to be careful,” said Khalid bin Arhama Al-Kuwari, head of formula racing at the Qatar Marine Sports Federation (QMSF), which runs under the presidency of Sheikh Hassan bin Jabor Al-Thani. “This is a team effort and we need them to race in a clean way. I felt sorry for Sami (Selio) that he missed out on Q3. I wanted him to be there to see how good we are. I was confident that we would have got the pole in any case.”

The qualifying success came a day after American driver Torrente suffered a scare in Wednesday afternoon’s extra free practice session when he flipped his boat on the course. It was a warning for the title contender, who is just two points behind Selio and two points ahead of Carella, to ease his pace somewhat on Thursday.

“Yeah, I was really pushing and got caught up in a gust and that’s all it took,” Torrente said. “It was a big hit.”

The team did a superb job to repair Torrente’s boat for the morning’s free practice session and the Florida native slotted into second position behind teammate Carella with a fastest lap of 44.28 seconds. Carella topped the charts with a 43.78-second lap after running for 34 laps.

The sixth and final round of the F1 H2O World Championship will take place Friday at 3 p.m. local time (7 a.m. EST). The Grand Prix can be watched live online via the tour’s official website at www.f1h2o.com.