Most high-performance boat owners who move to Florida do most of their boating—go figure—in Florida. But true to his Erie, Pa., roots, John LoRusso, a residential and commercial builder based in Fort Lauderdale, Fla., still heads back to the Great Lakes, particularly, Lake Erie, each summer to do his boating.

Or at least it was until December 2010 when LoRusso was bitten by the engine-upgrade bug. Knowing his engines needed to be completely rebuilt to reach his goal of no less than 525 hp per side, which should get the boat to about 80 mph with the right setup, he turned to John Montgomery of Performance Boat Rigging in Erie, Pa., and Tyler Crockett of Tyler Crocket Marine Engines in Ruby, Mich. Montgomery is providing all the rigging and final assembly—power steering, closed-cooling systems, etc.—for the engines. Crockett is providing the engine specifications and parts. A local machine shop is handling internal modifications and assembly. 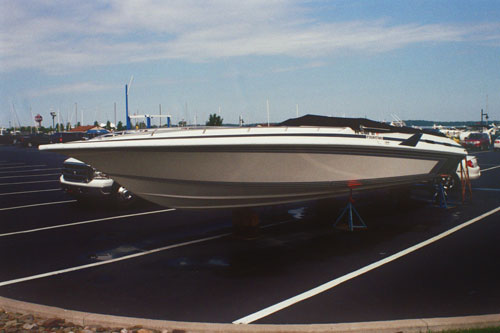 LoRusso is, for the most part, hands-off on the project.

“I write the checks,” he says.

The parts list for the engine rebuilds is, to put it mildly, extensive. Parts include Dart Iron Eagle heads. Brodix intakes, Crane lifters, Scorpion roller rocker, complete electronic fuel-injecting systems and more. All hoses, wires, cables and clamps have been completely replaced—and the batteries are now housed inboxes from Eddie Marine. but before any of that could happen Montgomery had to remove everything from the engine compartment and sand, finish and paint the bilge.

Completion of the engines, which will go to Crockett for dynamometer testing when they’re done, should happen in the next month or so, though LoRusso says he doesn’t expect the project to be completely finished before summer. He said he does plan to get it on the water in Florida, after testing on Lake Erie, in July.

“The longer it takes, the more I think of doing,” says LoRusso. “I took off the arch a few years ago, but with the arch the canvas leaked (the boat now has new canvas) so some of the wood behind the upholstery rotted. So we replaced that, as well as some of the upholstery.”

“The boat looks great,” he said. “It’s hard to believe how old it is.”