Despite a handful of things that need to be finished aesthetically speaking, the Waves and Wheels Ironman-themed project boat hit the water last weekend—and we have spy photos to prove it. Actually they’re just photos provided by Justin Wagner, owner of Waves and Wheels in Lake of the Ozarks, Mo. 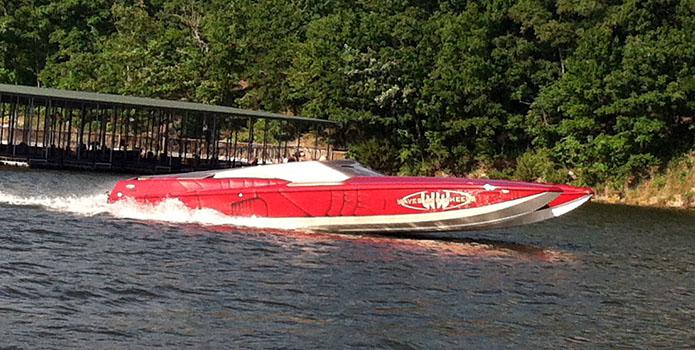 The Ironman-themed Hustler 377 Talon from Waves and Wheels took its maiden voyage on Lake of the Ozarks.

“The boat ran well the first time out,” said Wagner, who is taking the boat to Iowa this weekend to boat with family on the Mississippi River. “We couldn’t run it too fast as we had an air bubble in the power steering line, but, man, the boat accelerates like crazy. We’re hoping to get some better props on it and see what it can do.”

In the meantime, Wagner still has a lot of finishing touches to accomplish, including completing the audio/video entertainment system in the cockpit, adding the custom bow pods and eye pieces, and rounding it out with LED lighting in the engine compartment and along the transom. Not to mention anything he comes up with in between.

“Everyone who has seen this boat is pumped up about it,” Wagner added. “It really is like a whole new boat.”