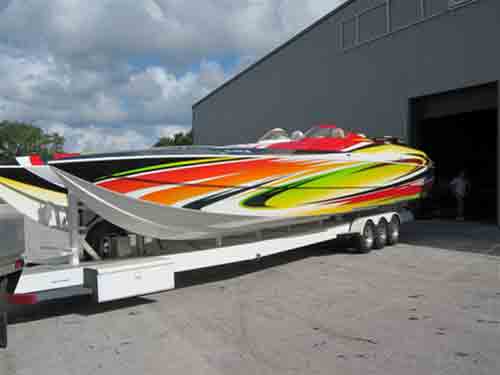 It’s fair to say that Walter Molosh has come a long way from the first powerboat—a wooden rowboat with a 7-hp engine—he owned as a kid. A lifelong performance-boat lover, Molosh, the president of TriState Industrial Contractors LLC in Dover, N.J., has owned more than 20 boats including a 36-foot-long Nor-Tech catamaran and a 38-foot-long Formula V-bottom, which he restored and still owns and runs.

“I have a big warehouse, and I keep it pretty full of performance boats, ski boats and Jet Skis,” says Molosh.

But in October 2010, Molosh upped his go-fast boat ante when he bought a 40-foot-long Skater catamaran built in 2000. Molosh heard about the boat from longtime friend Nick Buis of Statement Marine, and as soon as he took possession of it he sent the cat back to Douglas Marine/Skater in Douglas, Mich., so company principal Peter Hledin could give the hull a complete inspection.

In addition to inspecting the cat, Hledin and his crew replaced the fuel tanks so Molsoh could run fuel with Ethanol. They also swapped out the low water-pickups for external pickups.

“Peter was very happy with the hull,” says Molosh. “He said it was clean and sound, so I had a good base to work with. The original owner had it built and set up as a race boat with a light lay-up, but he never raced it.”

Because the Skater 40 had been stored in a climate-controlled warehouse, its paint and cockpit interior were unblemished. Molosh knew that unless he felt like spending a lot of money to update the color scheme, something he did consider and discuss with Dean Loucks at The Art of Design but ultimately decided against, it didn’t require restoration. Nor did the catamaran’s interior, which has a complete intercom system.

The Skater 40 was set up for single- or dual-person operation, which was part of the appeal for Molosh and his wife, Donna.

A closer look at the dash and controls.

But he did buy the boat without engines—it did still have its Mercury Racing No. 6 dry-sump drives—so he needed to find power. That came in the form of a pair of used 1,400-hp supercharged engines with 50 to 60 hours on them. The internal components, says Molosh, were in good shape, but he wanted them to be “as bulletproof as possible, at least as this level.” So he contacted Mark Boose and Chris Furhman at Precsion Marine in Kenner, La., to tear down the engines, rebuild them and detune them to 1,000 hp apiece.

“They totally went through the engines top to bottom,” says Molosh. “They rebuilt them with the best of everything including Big Chief heads and Sonny Bryant Cranks. They dynoed at 1,080 hp and we can get more of them out of them if we turn up the boost and run race fuel.

As noted, the Skater 40 still had its No. 6 drives when Molosh bought it. The only elements of the drivetrain he replaced were the transmissions.

The exhaust system, on the other hand, required wholesale replacement. Molosh had to go custom, and that meant new headers and Hardin Marine tailpipes with 16-inch silencers. Precision Marine also replaced the boat’s water and fuel systems. They were able, however, to retain the original motor mounts that married with the new engines “perfectly,” according to Molosh.

Precison Marine had to create a mock-up for the custom exhaust system.

Another look at the exhaust system mock-up, this time from one of the engines.

If all goes to plan, on-water testing of the 40-footer should begin today and Molosh and his wife, Donna Ruh, will head down the following day to log some seat time in their repowered 40-footer.

“We’re thinking of flying down Wednesday and then taking it to Orange Beach (Ala.) and running it there over Memorial Day weekend,” says Molosh. “One of the reasons that we bought the Skater is that it usually takes two people to run it. So I will throttle and Donna will drive. She’s a good driver, and she’s really into it. It’s kind of fun to have a team effort.”

Molosh budgeted $250,000 for the entire project—including the purchase of the hull—and says he is close to being on budget.

“We might go a little over if we get a tilt trailer, but that’s the best way to transport it so we probably will,” he says. “But you could spend $1 million on a new boat like this.

“You have to be a little crazy to do this,” he adds. “That’s why we named the boat ‘Madness.’”

For Molosh and his wife, Donna, the Skater 40 will be the perfect poker run boat.