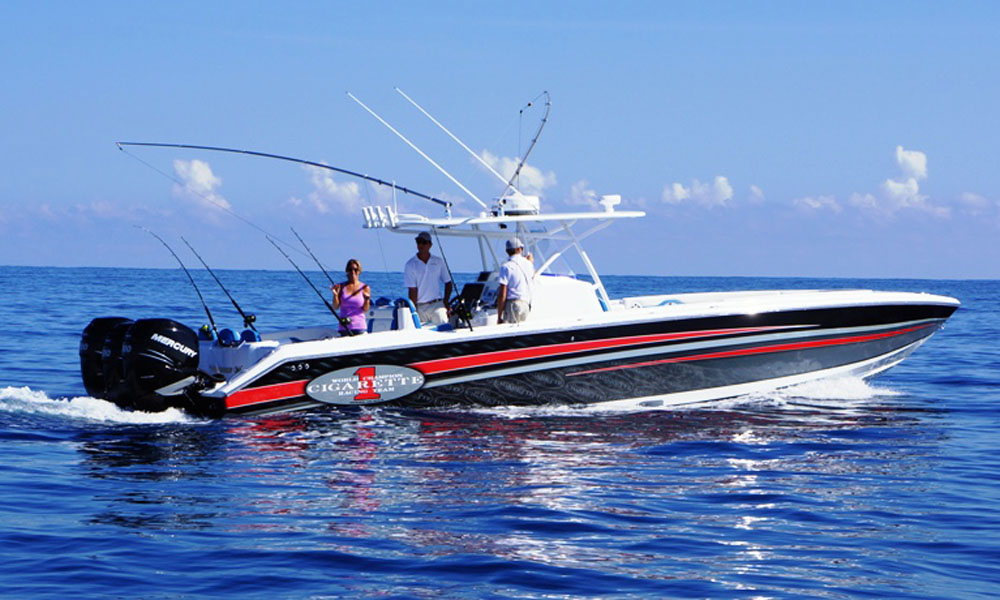 John Rosatti has been enjoying his Cigarette Racing 39 Top Fish, which was wrapped by Clearly Exotic Car Coverings.

Rosatti, a successful businessman who grew up in Brooklyn, N.Y., and now lives in South Florida, didn’t really want to wait six weeks for the boat to be painted so he went in a different direction. Rosatti turned to his friend, Gino Gargiulo, the former owner of the unforgettable Mercedes-themed 44 MTI.

The owner of Oil Can Man—South Florida’s premier 24/7 mobile fleet maintenance service business—Gargiulo started Clearly Exotic Car Coverings in Fort Lauderdale after Oil Can Man took on the task of vehicle graphics for some fleet customers. While setting out to find an installer capable of the task at hand, he met Eric Wood. After working together for a year, Gargiulo and Wood, who has more than 12 years experience in vehicle graphics, decided to take it to the next level by creating custom car wraps that provide both style and protection.

“Clearly Exotic Car Coverings specializes in high-end cars,” Gargiulo said. “Normally I don’t get into business around things I like because as soon as it’s a business you lose that love and it becomes frickin work. But this is different. Wrapping million-dollar Ferraris and other exotic cars is fun. It’s pretty cool to take a car and give it a whole new look or see one go from blah to outrageous.”

John Rosatti’s 162-foot Christiansen mega yacht, Remember When, makes his 50 Marauder and 39 Top Fish from Cigarette Racing look small.Gargiulo said he bought the best printer money can buy so the vinyl wraps can be printed at high resolution at practically any size. Gargiulo, who has a talented installation and design team, including Jose Rivas, who designed the wrap on the 39-footer, gave a lot of credit to the advancements in vinyl and other laminates for getting prints amazingly close to paint quality.

From the photos, the wrap looks really nice. But all you need to know is that Rosatti was impressed—enough said. You could say Rosatti, who, in addition to his Brooklyn Plaza Auto Mall and award-winning high-end restaurants, owns the fastest-growing all-natural burger franchise in the country BurgerFi, is a connoisseur of the finer things in life. For one, Rosatti is the proud owner of the 162-foot Christiansen mega yacht, Remember When, the last of a series of 15 boats he built. He’s also owned a variety of luxury automobiles and jets over the years.

“With John’s 39 Top Fish, he was looking at roughly $40,000 for a paint job,” Gargiulo said. “Let’s say money is not the issue—now just the time it takes to paint the boat is an issue. He probably wasn’t going to be able to use his boat for a couple of months by the time it was all said and done. I think the graphics for the Cigarette took about 15 hours of computer time because we couldn’t just take a picture of the 50’s paint job and print it; the quality wouldn’t be there. Other than that it was just the printing time and the install process, which took about five days.

“I didn’t start this business with the intention of wrapping boats, but the next thing you know you help one of your friends and you’re wrapping a boat,” he continued. “I’ve done a few boats, but John’s is the most elaborate by far. The best thing is that you can do so much to a boat and it doesn’t take much to do it. There are so many plain-looking boats out there, especially center consoles. Someone could change the look of their boat every year if they wanted—the opportunities are endless.”