Ron Mahurin never thought he’d own an Apache Powerboat, let alone be restoring one of the most iconic offshore powerboats in the sport’s history—the 41’ Apache. Last year, the Union, Mo., resident, who owns a home on Missouri’s Lake of the Ozarks, bought the 1990 model and has since spent the winter upgrading the 41-foot V-bottom, dubbed Bushwacker. 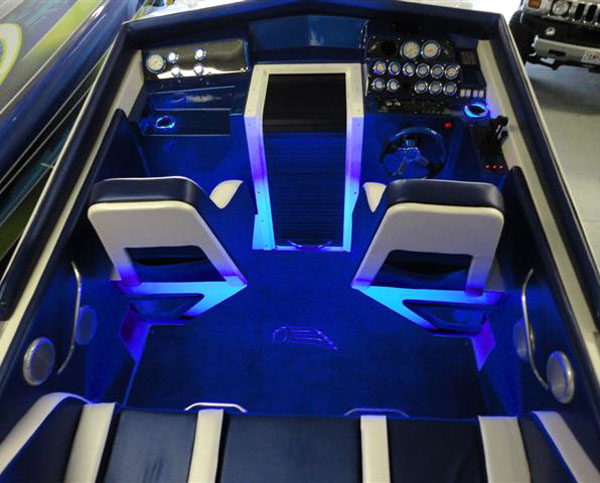 Waves and Wheels restored the cockpit of Ron Mahurin’s 1990 41′ Apache, giving it a much more modern look.

The most noticeable of the enhancements is the cockpit restoration. Mahurin turned to Waves and Wheels in Lake of the Ozarks, and owner Justin Wagner and his crew did not disappoint. Swapping the outdated teal interior for a dark blue and white upholstery combination, Waves and Wheels reconstructed the entire cockpit, including building new side and dash panels, powder coating the seat stands, installing new gauges and adding LED lighting throughout.

“I heard about Waves and Wheels because of stereos so I went to talk with Justin about one,” said Mahurin. “I’d be looking around for someone to hand the upholstery, but I didn’t know Justin did that. So we started chitchatting about his capabilities and he told me about some of his ideas. I decided to give him a shot, and he did a great job.

“It’s amazing what he did with that cockpit,” he continued. “I kind of put it in his hands. I wanted it to be cool, but timeless, and he nailed it. I’d highly recommend Waves and Wheels.”

Along with the cockpit lighting, LED lights were added to the engine compartment so when Mahurin pulls up the docks in the evening, he can pop the hatches and show off the big-blocks.

The 41-footer is powered by two Mercury Racing 800SC engines, which were recently bumped up to 900 hp apiece, according to Mahurin, by Advanced Marine in Lake of the Ozarks. Mahurin, who can’t wait for the boating season so he can run his unique Apache on the lake, said he bought the boat because Lake of the Ozarks “almost demands a big wave crusher like it.”

And that’s coming from a boater who has owned both a Wellcraft Scarab 38 KV (a V-bottom) and an open-cockpit 36-foot Cobra (a catamaran), which was the former Out for Justice race boat. Here’s a look at some of the before-and-after images of the Apache as well as others from the boat’s past. Click images to enlarge and for caption information