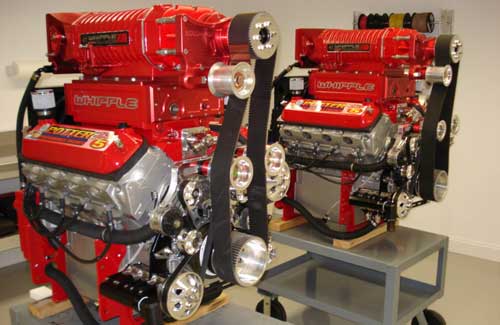 The engines for the 44′ MTI catamaran Speed Racer were built by Potter Performance.

With plans to move into the new 12,000-square-foot facility it purchased in Sarasota, Fla. on December 1, the people at Potter Performance Engines in nearby Bradenton are busy getting ready for the transition. In addition to the in-house crew, contractors are currently completing the build-out of the new plant.

“It’s an awesome building,” Potter continued. “The guy who built it builds highways, so they took everything to highway grade before they poured concrete. It’s architectural block nine feet up all the way around, and then heavy steel to the top. The building is 30 feet tall and has all kinds of overhead doors. There’s a 20-footer where Speed Racer (the well-known 44-foot-long MTI catamaran) will be kept. It’s a really top-shelf facility, the kind I always wanted to have when I finally bought my own place.”

Potter said the new facility will increase his production floor space by approximately 1,000 square feet, but also has an 1,800-square-foot second floor. In addition to the production floor, machine shop and dynamometer cells, the plant will have several offices.

Potter added that extra space will come in handy this winter.

“We have a bunch of stuff coming down for the winter,” he said. “Most of the stuff is rebuilds and upgrades, plus the high-end car stuff keeps us busy. The high-performance marine industry has changed so much with the state of the economy. A lot of people who bought repossessed boats want to upgrade their power rather than buying new stuff.”

Reggie Fountain on Real Fast Powerboats: “This is no time to...

Braver On Cigarette: “We have no outstanding bonds.”