Your go-to source for performance boating.
HomeMattBlogPotter on Speed Racer: “Best rigged, best handling cat I’ve ever been in.”

Potter on Speed Racer: “Best rigged, best handling cat I’ve ever been in.”

Potter on Speed Racer: “Best rigged, best handling cat I’ve ever been in.” 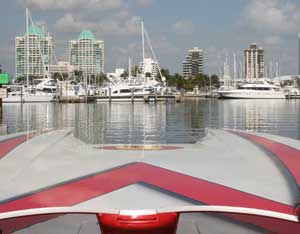 Caught up with Ron Potter of Potter Performance Engines earlier today for an engine-builder round-up piece I’m doing for Powerboat magazine. Potter, who founded the Bradenton, Fla., company 5-1/2 years ago, said he’d just tested the newly renovated Speed Racer Marine Technology, Inc., catamaran with MTI principal Randy Scism last week. The boat is owned by Bob Christie, a well-known participant and sponsor (and in the interest of full disclosure, a personal friend of mine) on the poker run scene who lives in New Jersey.

In addition to getting a new six-person cockpit, windshield and GPS system, the 44-footer and its twin supercharged Potter engines were completely re-rigged. Gone are the surface drives and crash boxes, replaced by No. 6 drives with two-speed transmissions.

“We ran it for half a day in Sarasota Bay (Fla.) at various speeds and loads, and at 5,700 rpm we were running 165 mph,” said Potter. “That boat has 180 mph in it—I’m telling you. And with the two-speed transmissions, it’s like a Rolls Royce around the docks.

“MTI gutted and re-rigged the whole boat,” Potter continued. “It’s like a new boat, and it’s the best-rigged, best-handling cat I’ve ever been in. It’s sweet, man.”