Poker Runs America and the American Poker Runs Association (APRA) will have a seven-event season in 2017. Mercury Racing is back on board as a sponsor and Poker Runs America president/publisher Bill Taylor said his still in negotiations with 2016 series sponsor Fiji Water as well as other companies and organizations.

“Last year was such a success that we’re going to continue moving forward,” said Taylor.

In 2016, the organization moved some dates including its signature event, the 1000 Islands Poker Run, so it wouldn’t conflict with the popular Buffalo Poker Run and it turned out to be a smart move. The 1,000 Islands Poker Run had 90 boats entered, a number that nearly doubled the previous year’s participants.

The 2017 season will kick off on the weekend of July 29 with the Hall of Fame Poker Run in Alexandria Bay, N.Y. This event is famous for its picturesque scenery along the St. Laurence Seaway. It’s also the hometown of the popular G3 Aqua-Mania race team and its stunning turbine-powered 52’ MTI catamaran.

Taylor said he’s still awaiting a firm date for the Bay of Quinte Poker Run in Belleville/Toronto, Ontario. Keep an eye on the Poker Runs America website for any updates. 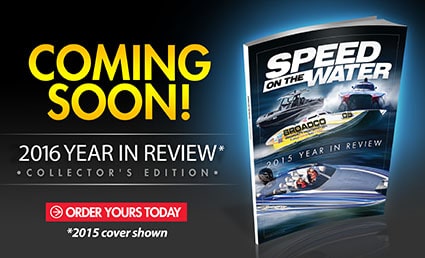 The first weekend in August will mark the second CAN/AM Presidents Cup VIP Poker Run in Sault Ste. Marie, Ontario. The 2016 edition of this invitation-only event was a huge hit with the participants who were treated to first-class service and accommodations.

PRA’s flagship event, the CAN/AM 1,000 Islands Poker Run, will take place on the weekend of August 19 in Kingston, Ontario. As stated above, this event drew an impressive fleet in 2016, including a strong fleet of Outerlimits Powerboats. Vinnie Diorio took delivery of his Outelimits SV43, Cazzo Veloce, which was powered by twin Mercury Racing 1350s and Chris Mastronardi ran in his SV50, also powered by 1350s.

The last weekend in August, the poker runners take to Chesapeake Bay for the Rock The Bay Poker Run at the Nauti Goose Saloon in Northeast, Md. This is always a popular event and 2017 will be its second year being run under Poker Runs America auspices.

On September 2-3, the boats return to north of the border for the Lake Ontario Poker Run in Toronto. As the season starts to wind down, the temperatures are a little cooler and the fall foliage starts to brighten, making this one of the most spectacularly visual events of the season.

Finally, when things are getting cold in Canada, Taylor and his crew head to Cape Coral, Fla., for the final event of 2017 on the weekend of October 14-15. This year, Marine Technology Inc.’s new 340 X outboard-powered catamaran made its debut, as did the Poker Runs America new safety boat, a Sunsation 32 CCX center console powered by twin Mercury Racing Verado 400R outboards.