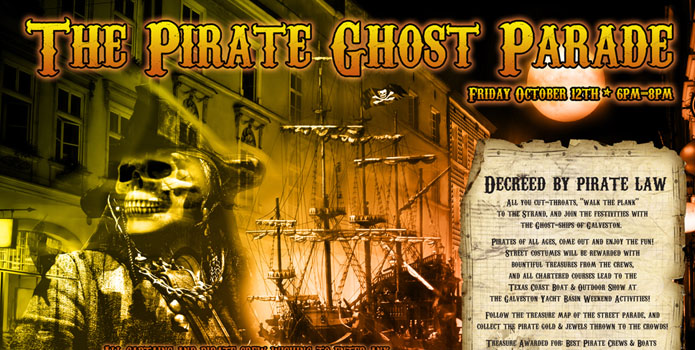 From the crew behind the Texas Outlaw Challenge, the recently announced Pirate Ghost Parade is coming to the streets of Galveston, Texas, this Friday (Oct. 12).

The Mardi Gras-style parade is expected to feature an armada of boats ferrying pirate crews sharing “treasure beads and doubloons” with the crowds along Market St., Post Office St. and The Strand from 6 p.m. to 8 p.m. on Friday. Party-goers and children who join in with the pirate dress theme will no doubt be awarded the bulk of the “treasures” tossed to the crowd.

After the parade, participants are invited to a hospitality party with complimentary food and drink at the new location of Gulf Coast Marine Service at the Galveston Yacht Basin, followed by a “serious search for rum” downtown in The Strand.

Then on Saturday, organizers are inviting all boaters on another adventure—the Treasure Chest Rum Run, which will leave the Galveston Yacht Basin at 11 a.m., and continue on to the Topwater Grille for lunch followed by a run to the Turtle Club in Clear Lake where prizes will be awarded.

All Pirate Ghost captains wishing to enter any trailered boat with crew and treasure on-board floating through the streets of Galveston, can register at www.PirateGhostParade.com.