“It’s kind of like a dream come true,” Pierce said Saturday while sitting at the docks in Key West the day after running the boat down from Miami with Pyburn. “Originally when I started thinking about selling XXX, I rode with Bill at the Tickfaw 200 Poker Run and I was just going to ride in the back seat but then he told me to drive and I was done from there. I thought man I have to go buy a 388. I started talking to Skater about a new one and I wanted Bill to help me build it and he said ‘Man you should just buy mine.’ I thought there’s no way I could afford it, but then we went back and forth a couple of times and we worked out a deal over the summer.

“Part of the deal is that Bill is going to ride with me next year and teach me to drive the boat,” he continued. “That made me feel a lot more comfortable with the purchase. I don’t have a whole lot of (catamaran) experience, so who better to learn from than Bill? The boat rides so well, it’s unbelievable really. I’ve been in some other Skaters, but this is the best one I’ve been in. It’s so comfortable and the power is incredible—maybe a little more than we need but it’s going to be fun.”

For more photos of Pure Platinum from this week, check out the slideshow above.

Pierce said he had been thinking about a cat for the past year, primarily because he wanted to go faster, but he wasn’t sure what boat he wanted. Pure Platinum, of course, wasn’t even a thought in the back of his mind mainly because he didn’t think Pyburn would get rid of the stunning 38-footer. To make the deal happen smoothly, Pierce and Pyburn worked through Brand X Brokerage and Sales in Pompano Beach, Fla.

“I guess I like buying the boats with the big names,” Pierce said with a chuckle. “I love the colors of this boat—they definitely suit me. One of the best things is that this is the first boat I’ve bought that doesn’t need any work. All the boats I’ve bought in the past I’ve had to redo some things. I am sending my truck to Dean Loucks to have the team at The Art of Design paint it, but that’s about it.”

Pierce said he plans to keep the boat with Pyburn Florida at least through February as he plans to do the Florida Powerboat Club’s Miami Boat Show Poker Run. Beyond that he’s not sure what other events he’s going to do, but he knows he’s looking forward to running Pure Platinum no matter where it is. 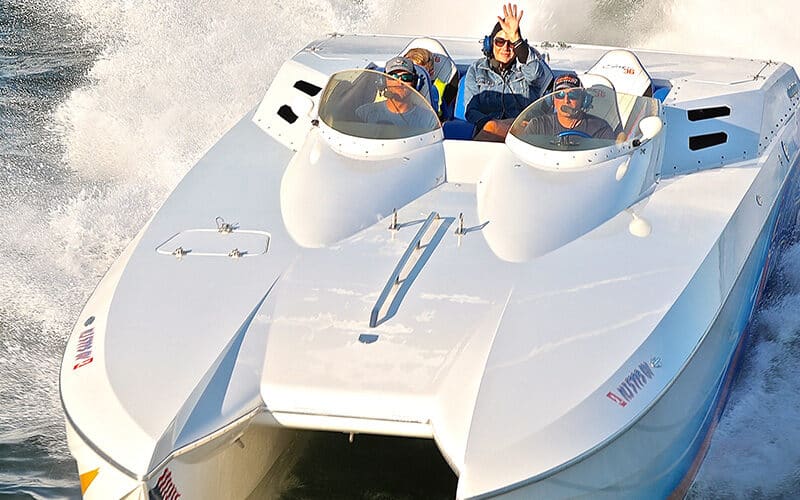