Your go-to source for performance boating.
HomeIn the NewsPhotographer Brown on Sean Collins: “Couldn’t have done it without him.”

Photographer Brown on Sean Collins: “Couldn’t have done it without him.”

Photographer Brown on Sean Collins: “Couldn’t have done it without him.” 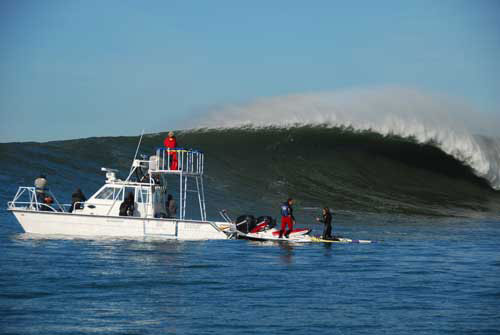 Photographers such as Robert, shown here in his boat at Mavericks, relied on Sean Collins for his remarkably accurate big-wave forecasts.

While Brown is well-known in the go-fast boat community for his work in Powerboat magazine, Personal Watercraft Illustrated magazine and—more recently—Sportboat magazine, he is even better-known in the surfing community for the images he captured of surfers on some of the largest waves ever ridden. Using a forecast from Sean Collins, Brown and surfers Mike Parsons, Brad Gerlach, Peter Mel and Ken “Skindog” Collins.  completed to the first-ever expedition to Cortes Bank, a big-wave surf spot 100 miles west of San Diego, almost ten years ago. There Brown photographed Parsons riding a wave measured at 66 feet tall.

“There is no way any of it would have happened without Sean Collins,” said Brown, who relied on Collins for big-wave forecasts for all of his surfing photography expeditions. “We couldn’t have done it without him. He was the absolute best, and not just with Cortes Bank. He also was amazing with his predictions for Todos Santos (another big-wave spot off an island off the coast of Baja, Mexico). I would drive down there and head out in my boat in the rain, and he could tell me when the wind was going to shift and blow offshore—and be right on it.

“I’m actually heading up to Mavericks (a big-wave spot outside Half Moon Bay, Calif.) next week with my boat, for a movie they’re making there, based on a forecast I got from Sean on December 25,” Brown added. “His loss is devastating. He was every bit as much of a pioneer as the surfers who rode the waves he said would come.”