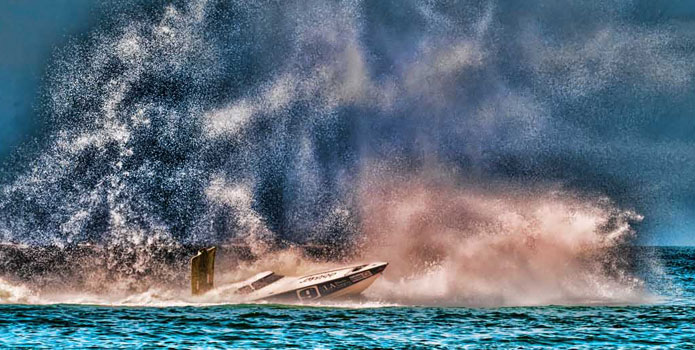 In this explosive-looking water-filled photo from Jay Nichols/Naples image, you can imagine the force felt by Mark Niemann and Kurt Jagel when they crashed the Phantom 9 raceboat at the Sarasota Grand Prix in July.

Not only was it nice to just see Kurt Jagel, the throttleman of the Phantom 9 racing team that was involved in a violent crash in Sarasota, Fla., in July, at San Diego Bayfair last weekend as he’s fortunate to be alive, it was also nice to learn that Jagel and his teammate Mark Niemann plan on racing in the team’s rebuilt 30-foot Phantom at the fifth annual Brighthouse Clearwater Super Boat National Championship (Sept. 27-29).

“The new deck is on and it looks amazing,” Jagel said. “We feel like it’s going to be substantially stronger and possibly even a little lighter. Now it’s just a matter of getting the boat re-rigged and getting all of the equipment set up. It’s just a lot of labor right now, stuff like wiring and bolting things together—it’s now just really the laborious part of it.”

Jagel gave a lot of credit to Niemann, the team’s driver/owner, for stepping up and logging long days at his race shop, Marker 1 Marine in Sarasota, to keep the boat progress moving.

“My co-pilot Mark has been literally been putting in 16-hour days covered in fiberglass,” said Jagel who is in the middle of moving from Southern California to Las Vegas. “He and Will Smith have been busting their asses to get that new deck on and everything. We’re real confident that the boat will be stronger and safer than ever.”

Jagel said the team won’t have much—if any at all—time to test before the Superboat Vee class race in Clearwater, Fla. He expects to run a conservative setup, something the team knows should work well from past experience in the 30-footer, and try to complete the race without any complications.

When asked if he’ll have any hesitation getting back in the boat, Jagel replied, “absolutely not.”

“You know what? It was a bad wreck but Mark and I swam away from it, and it’s all because of our preparation and the safety and everything else that we did to make the boast as safe as possible,” Jagel said. “Now we’re going out in an even safer boat and we know it is that much better. We’re completely confident and looking forward to getting back in.”