Your go-to source for performance boating.
HomeIn the NewsPeters & May: “Reinvesting” in Powerboat Racing 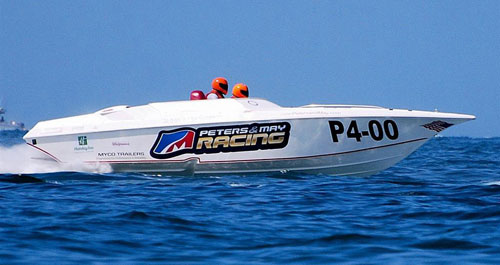 Trent Weyant’s Fountain is one of 13 race boats sponsored by Peters & May.

A little more than three years ago, Peters & May, the global leader for powerboat transportation in everything from yachts to wakeboard boats, took over its United States-based agent and renamed it Peters & May USA. Since then, the company, which is headquartered in Eastleigh, England has made a steady sponsorship push in Unlimited hydroplane racing—including the hydro “feeder” classes—as well as a more limited push, at least for now, in offshore racing.

At present, Peters & May sponsors 13 teams. They include offshore racer Trent Weyant’s Fountain and the Mystic-built SilverHook V-bottom that is piloted by Nigel Hook and competes in the Ocean Grand Prix series overseas, as well an Unlimited hydroplane piloted by J.W. Myers in the American Powerboat Boat Association-sanctioned H-1 series, which is sponsored by the Air National Guard.

Without question, expanding market-share through name recognition is the incentive behind all of the company’s powerboat sponsorships in the U.S., despite that 90 percent of the domestically produced pleasure and performance boats shipped overseas—about 5,000 units each year—arrive there via Peters & May. Still, that leaves a considerable amount of business on the table, much of which is in Florida.

This morning, I caught up with Holley—after weeks of missing one another—at his Eastleigh office by phone. The subject of our interview was the current state of powerboat racing here and abroad, as well as the value of powerboat racing sponsorships. Here’s what he had to say.

Peters & May sponsors an Unlimited hydroplane. What benefits are you seeing from that?

(Laughs) A bit crazy, isn’t it? I’m a boat-racing guy. I grew up in the Middle East—I spent 20 years in Dubai—and I got to know Sheikh Hassan of Qatar. We started shipping Unlimited hydroplanes over there when they got involved in racing them. I eventually went to a race in Evansville (Ind.) and realized that this (sponsoring an Unlimited hydroplane) was a good way of getting our brand out there. It’s become a vehicle for getting the sport to grow. The more we invest in it, the more the sport grows and the more we get out of it.

Two years ago, nobody knew he Peters & May was. Now, everybody does.

The sport is going through difficult times, and that’s not just in the states. Promoters have made promises that have not been fulfilled. From my perspective, it seems like you can go to Key West, pay $5,000 and be a world champion. I don’t think that’s the way to move forward. I do think the organizations are doing a good job of it, but they need to come together.

We’re involved in P1, as you know, and I think that’s quite a good way to move forward because you put all the drivers in the same Panther boats and it becomes a matter of driver ability.

But I’m English. What do I know? (laughs)

David Holley (right) with a member of the Peters & May Unlimited hydroplane crew.

Would Peters & May consider being a title sponsor for an offshore racing series in the United States?

We have looked at it. Last year, we made $320,000 on shipping race boats and we spent $350,000 on race boat sponsorships. We are essentially reinvesting what me make from the sport back into the sport. We have to be careful about what we’re spending—I still have to answer to a board of directors who will ask me, “What did we get for the money we spent on this?”—but we’re definitely looking at it.

A lot of people say that want to develop the sport, and then they just take money out of it. The real satisfaction is in developing something. We just have to keep developing it.

You mentioned alluded to the fact that offshore racing also is struggling overseas. Are the problems the same as they are here?

I think so. Plus, you can’t count out the recession. It’s a rich man’s sport over there—a Class 1 campaign costs millions to do. It’s all about pride and ego.

When I went to New Jersey for a P1 race (in 2010), it looked really good, and not as a sport only a few people could afford but for people on a budget who want to go racing. At the moment, we’re focusing on the grass roots stuff in offshore racing, as well as in the hydroplanes. Last year in Seattle, we decided to sponsor the entry fees for the kids who were racing in the grass roots classes. It was like $60. You should have seen the looks on their faces. But in ten years, these will be the guys who will be racing Unlimiteds.