Dave Patnaude, the longtime president of the New Jersey Performance Powerboat Club, has launched a new website called eBoatBroker.com. According to a press release from the new outfit, the site is a “one-stop” portal for boat brokerage, financing and insurance. 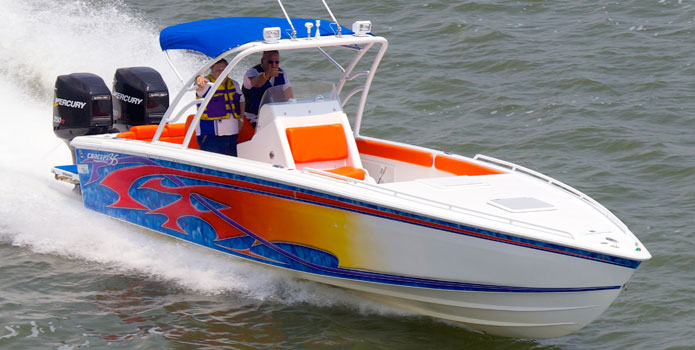 While Patnaude (shown here in his 36-foot Concept center console) is a lifelong performance-boat enthusiast, eBoatBrokerage.com will not focus exclusively on that segment of the market. Photo courtesy/copyright Tim Sharkey/Sharkey Images.

“What makes eBoatBrokers.com different is what we don’t do,” said Patnaude, who handled marine lending for Essex Credit for seven years and Bank of America for three years, in the release. “We don’t hand off a buyer to another contact at a lending institution or insurance company. Instead, we handle all three transactions. At eBoatBrokers.com, the client works with a single individual.”

According to Patnaude, eBoatBroker.com will go beyond standard online listings by maximizing exposure on major sale-and-purchase sites—most notably ebay and craigslist—that are not exclusive to the marine world and, as such, reach a broader audience.

“Other brokers might place a client’s boat on web listings and sit back waiting for an e-mail or for the phone to ring,” said Patnaude in the release. “While we provide those same listings, we also aggressively market a serious seller’s boat through non-traditional outlets, which are more effective than people might think.”

The site also has a network of 16 other lenders to match a client with the most appropriate financing package. For the new-boat buyers, eBoatBrokers.com serves as the official Northeast Factory Representative for Concept Boats according to the release.

Joining the new company as vice president/brokerage is Jim Natoli. Well known in performance-boat circles thanks to 15 years of powerboat racing, Natoli brings 20 years of financial markets experience to his new position, according to the release.

While Patnaude has owned a number of performance boats—his current boat is a 36-foot Concept center console—and that is where much of his boating experience lies, eBoatBrokers.com will serve a broader market of the boating world.

“Our focus will be on all major segments of the industry,” he said. “This will include cruisers, centers consoles, performance center consoles and go-fast boats. I think the more diversified we are, the stronger we will be in the long term.”