With today’s announcement from the Offshore Powerboat Association that its October 22-25 World Championships have the official green light to happen in Morehead City, N.C., race-deprived teams are making plans to return to the accommodating venue. Earlier this month, Morehead City hosted the Crystal Coast Grand Prix, which saw a 35-foot boat fleet take to the 4.3-mile course.

Steve Curtis (left) and Travis Pastrana are hoping to share the cockpit of the Miss GEICO catamaran for the first time during race conditions in North Carolina next month. Photo by Cole McGowan courtesy/copyright of the Miss GEICO offshore racing team.

Among the notable teams planning to return to the event is the Class ONE Miss GEICO outfit, which ran uncontested in Crystal Coast Grand Prix with veteran offshore racers Steve Curtis and Brit Lilly in the cockpit. According to Miss GEICO crew chief Gary Stray, extreme motorsports great Travis Pastrana will join Curtis in the 47-foot Victory catamaran in Morehead City next month.

The contest will present Pastrana’s first opportunity to drive the boat in race conditions.

“The first race went even better than we anticipated,” said Torrente, who also is in preparation mode and hoping to three-peat in the upcoming F1H2O series with Team Abu Dhabi. “By the time we get back to Morehead City, Eric will have had five races under his belt as we’ll be competing at the Offshore At the Ozarks-Cat Edition event at the Lake of the Ozarks early next month. So we’ll be ready to push the boat at or near its limits in Morehead City.

“We have a good baseline setup, but there are definitely things we can improve,” he continued. “We had good water conditions in Morehead City the first time, but it was muggy and rainy. I don’t think it will be that way the next time around.”

Torrente praised the venue for its exceptional hospitality—yet another reason he and Belisle are eager to return.

“I cannot explain how gracious everyone was in Morehead City,” he said. “It was really, really wonderful. We can’t wait to go back.”

Torrente said he expects no less than 10 Super Stock teams to return to North Carolina. Among those is the Jackhammer team of Reese Langheim and Ricky Maldonado, which had a rough go—a roll-over in the first lap—during its last outing at the venue. Hoping for a reversal of fortune, Langheim and Maldonado, who run a 32-foot Victory catamaran, said they plan to make it back to Morehead City, as well to the Offshore at the Ozarks event, next month.

“We are making it happen,” Langheim said.

“Although there was no structural damage to the boat, we had to rewire it, re-do the fuel system and steering and go through the engine, plus fix a gear-case,” Maldonado said. “It has been a week of very hard work—10 days straight of basically working 20 hours a day.

“We are ready and will fix our ‘luck issues’ with more had work and better racing,” he continued. “We got this.”

Catching Up With Miss GEICO’s Steve Curtis And Gary Stray 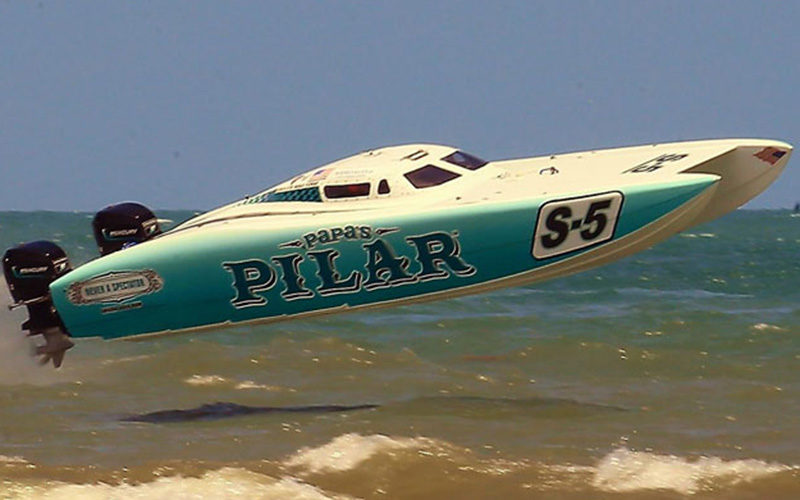