Your go-to source for performance boating.
HomeIn the NewsOuterlimits Teaming Up With Steve Curtis On Catamaran Line

Outerlimits Teaming Up With Steve Curtis On Catamaran Line

Outerlimits Teaming Up With Steve Curtis On Catamaran Line

World championship-winning offshore racer and setup man Steve Curtis and Mike Fiore, the founder and owner, of Outerlimits Offshore Powerboats have reached an agreement that will have Curtis developing future Outerlimits catamaran models, as well advising on the set up of the company’s current cats. Curtis and Fiore met yesterday at the Outerlimits facility in Bristol, R.I., to finalize their agreement to collaborate. 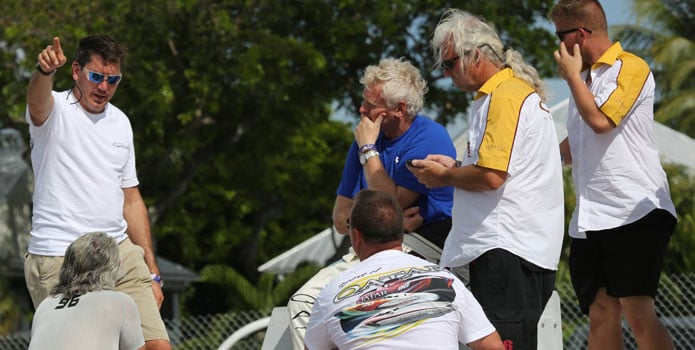 Said Curtis (in blue shirt): “Mike and I are both second-generation boat builders.”

“Steve is going to direct the development of all of our new catamaran models—he actually helped us with our new 46 that will come out this spring—and we couldn’t be happier about it,” said Fiore. “A lot of people today, especially in the poker run world, who don’t know a lot about the history of offshore racing probably don’t realize that Steve’s father started Cougar catamarans, which dominated the racecourse in the 1980s. And as a lot of people do know, my father brought stepped V-bottoms into the mainstream and offshore racing, also in the 1980s. So it’s a very good match, and I am honored that he will be working with us.”

“Mike and I are both second-generation boat builders,” said Curtis, who as a consultant for Outerlimits will continue his role of team manager and primary throttleman for the Qatar offshore racing team. “He’s already had such great success with V-hulls, and I hope I can help him reached the same level of success with his catamarans, not just in setup and design but with the latest technology. I’ve always got on very well with Mike, and I’m looking forward to getting more involved in Outerlimts’ catamaran designs and helping to make them run and handle even better.

“Outerlimits has such a great facility and all the latest carbon fiber and pre-preg technology,” he added. “They can build anything they need to, and that’s what it takes to build these boats at the highest level.”

Editor’s Note: Look for an exclusive first-look profile of the new Outerlimits 46-foot catamaran in the March/April issue of Speed On The Water digital magazine.

World Championships to Stay in Key West in 2014