On Monday morning following the early September Lake Cumberland Poker Run in Kentucky, a text message with a photo appeared on my phone. The message was from Jason Johnson, my partner in speedonwater.com, and it posed a simple question about the generic-looking white catamaran in the attached image.

Johnson got straight to the point.

“What the hell is this?” he asked.

Like my longtime friend and colleague, I had no idea. But I also noticed the Mystic name and logo on its rear starboard hullside, and as someone who at least likes to think he knows the Mystic brand better than most, I was stumped.

A phone call to John Cosker, the founder and owner of Mystic Powerboats in Deland, Fla., resolved the mystery.

“That was the first Mystic catamaran, a 32-footer, I had built as a running plug before I began working with Dave Callan in 1998,” Cosker explained. “Right after I finished it, Dave called and had me building all of this exotic stuff. It was the opportunity of a lifetime and it lasted 10 years. We built 55-, 62- and 70-footers and at that point I was just aiming at big boats.

“So I pulled the carbureted Mercury Racing 500-hp engines with Bravo drives out of it and sold them,” he continued. “And the boat sat in our first facility in Deland until Rob called and bought it.”

A former Fountain Powerboats V-bottom owner who runs a corporate aviation company’s service department, Schroeder soon had the cat at his home in Lawrenceburg, Ind. His first order of business was to repower the 32-footer, which he did with a pair of home-built supercharged 516-cubic-inch engines producing approximately 700 hp per side. To put the power to the water, he installed crash boxes and Mercury Racing No. 5 drives.

A few years later, Schroeder added a transom bustle after consulting with Cosker about the proper materials to use for the project. The addition extended the boat’s overall length to 35 feet.

For the Schroeders, the one-of-a-kind Mystic catamaran is an ideal platform for family boating on Lake Cumberland and the Ohio River.

“I always thought it looked a little too ‘blocky,’” said Schroeder, who also owns a powerboat and automobile parts fabrication, rigging, service and engine-dressing business called 111Motorsports, which he operates in his “spare” time.

Created as a running plug, the one-off catamaran is accordingly robust. According to Cosker and Schroeder, it weighs roughly 10,000 pounds. Though Schroder has piloted the cat to 110 mph, he bought the boat—his first catamaran—for family boating with his wife, Natalie, and their three children, ages 17 to 23, on Lake Cumberland and the Ohio River.

“Even though it’s heavy, I really like this boat,” he said.

Asked if he often has to explain what the Mystic logo is doing on a now-35-foot, one-of-one catamaran to his fellow powerboat owners, Schroeder laughed.

“I’ve had that conversation a few times,” he said, then laughed again. “’What is this?’ I didn’t know Mystic made a catamaran this small.’ And then I tell them the story.

Check out In The Lead with Mystic Powerboats founder John Cosker by clicking the video above. 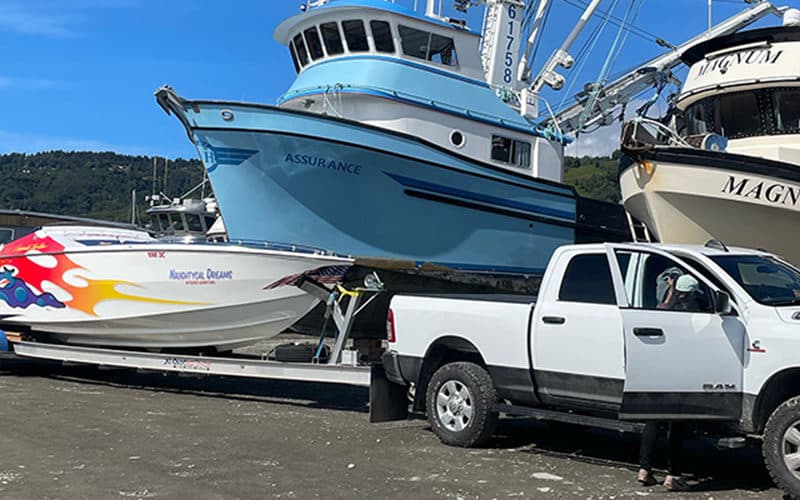