Your go-to source for performance boating.
HomeIn the NewsOn to the Next Record—A Guinness Record 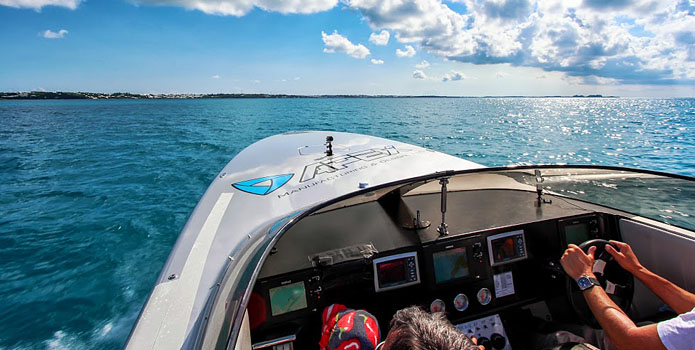 Chris Fertig and Tyson Garvin aren’t wasting any time. According to Garvin, of Joplin, Mo., he and Fertig, of Virginia Beach, Va., are aiming to set a new Guinness World Record as soon as possible. Less than two weeks after driving their Skater Powerboats 399 V-bottom across the Atlantic Ocean, the two performance boat aficionados are looking to establish a record from Bermuda to the United States.

Surely most of you are familiar with the duo’s recent record-setting run from New York to Bermuda as part of Boating Magazine’s Bermuda Challenge. If not, let me briefly fill you in. The first two-time Bermuda Challenge record setters finished the 780-plus-mile endurance run in 15 hours and 48 minutes just after midnight on August 22. The feat was accomplished nearly a year after the two completed the run in a diesel-powered 37-foot Statement Marine center console in 21 hours and 39 minutes, a record that was broke two months later by legendary Italian boatbuilder Fabio Buzzi in 17 hours and 6 minutes. (For more, you can watch this video interview, check out the OSO thread or read Eric Colby’s preview he wrote a few months back.)

Read more: On to the Next Record—A Guinness Record