Your go-to source for performance boating.
HomeIn the NewsOn Scene At The Buffalo Poker Run: Record Fleet Full Of Classics

On Scene At The Buffalo Poker Run: Record Fleet Full Of Classics

On Scene At The Buffalo Poker Run: Record Fleet Full Of Classics

It was an embarrassment of riches. The Western New York Offshore Powerboat Association offered me a choice of four rides during the Buffalo Poker Run: Two 38′ Formula FAS3Techs—one of my all-time favorite rides—a 1999 Hustler 388 Slingshot and a 1988 Formula F311 SR-1.

While I struggled with the decision, club president Steve McKie and event coordinator Anthony Scioli struggled with where they were going to put the record 102 boats that came to the event and other logistical concerns that occur when your fleet nearly doubles from what was anticipated. 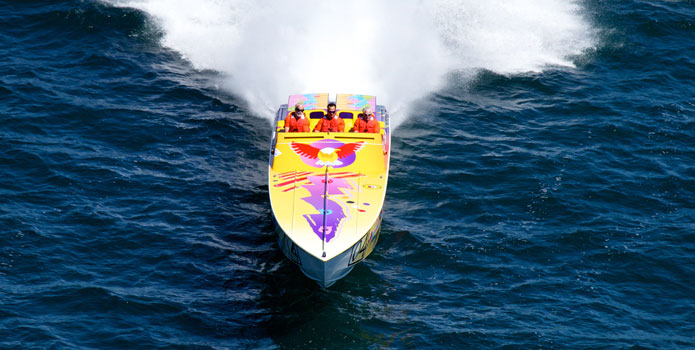 Impeccably kept go-fast boats such as this one were everywhere in the 102-boat fleet. All photos courtesy/copyright Tim Sharkey/Sharkey Images.

As a realist, I knew it wasn’t me, but speedonthewater.com these captains wanted on their vessels. And the decision was easy to make. Having always admired but never riding on a Hustler, that choice was made. But there was something very alluring about a 25-year-old boat from a favorite manufacturer; and how does one pass up an opportunity to ride with “Captain” Morgan?

Mike Brienzi, of Rochester, N.Y., has been doing poker runs since 1988, and is an inductee in the Poker Runs America Hall of Fame. He purchased his Hustler new and with the exception of paint and power in 2009, the boat is completely original. It’s his third set of power, 700-hp naturally aspirated Bullets, which he describes not as “old school” but “easy, old-fashioned horsepower with gas and air; very simple to work on.” Brienzi fell in love with the boat when he saw one at a poker run in 1998. “I love the style. It’s one of the best looking boats in its size class and they’re made right here in New York,” he said.

Just a stone’s throw away from the run, Niagara Falls pumps out its famed rainbow.

For me, the Hustler rides as good as it looks, handling the big, snotty water at the start of the run with ease and quickly moving through the pack. Despite wicked water the boat was stable, controllable and provided a very secure feeling ride.

Brienzi had an entire crew of boat-less. His friend Kevin Satter, who owns a 260 Sea Ray, said he likes getting out with Mike because “This cures my curiosity about wanting to own a boat like this.” Also aboard, Buffalo native Chris Connelly who had just sold his Hustler seven days ago. “It hurts a little a bit to see her here at the run,” he said wistfully, starring over the raft-up at his former vessel, “but I’ll be a passenger any day if I have to.” Connelly will soon be back in a boat as he and his wife Laurie—part of the crew on my second ride—are life-long boaters who met as youth members of a local boat club and had their first date on Chris’s first boat, a Baja.

There was an impressive array of hardware here; a half-dozen or so outboard boats from 20-footers to triple-engine Fountains, some sport cruisers and a surprising number of boats from the 1980s and 1990s.

One such boat was the above-mentioned Formula, owned by Jeff “Captain” Morgan, whose 25-year-old boat looks showroom new and is completely original, “except for the stereo,” he readily volunteers. Morgan is only the second owner of the boat. “It has 850 hours on it, and I bought it with 407 hours.”

Smaller boats were as welcome as they were plentiful at the run.

Despite its age, the 32-footer rides as water-gripping as any Formula, cutting through Lake Erie chop like butter. With stock twin MerCruisers, the boat tops out at about 60 mph, which is just plenty, Morgan said. “I like going 50 mph on the water and 100 mph on the dock,” he said with a hearty chuckle and following a bonding session on the docks with his namesake beverage the night before, I can attest that he is skilled at both. Rounding out our second crew was Jeff’s fiancé Sandi Vigliotti, an impressively vigilant spotter while underway and skilled rope-braider at the dock. It’s obvious why he wants to marry her.

Seeing a lot of these older classics should demonstrate to every boater the importance of meticulous maintenance and treating your boat like another member of the family.

And family is the feeling one gets when hanging with one of the nicest groups of people you could meet at a boating event. With a route that took us through the Erie Canal, the Niagara River within mist-viewing of the Niagara Falls, across Lake Erie to a raft-up at Sunset Beach, and an impressive boat count, if you plan on towing long-distance to a run next year, the Buffalo Poker Run should definitely be on your short list. And you may want to consider booking early, just to make sure you get a space.

The raft-up off Sunset Beach was among the highlights of today’s event.

Related story: On Scene At The Buffalo Poker Run: Looking For A Record Fleet

On Scene At The Buffalo Poker Run: Looking For A Record Flee...