Your go-to source for performance boating.
HomeIn the NewsOlson In Line for Top Gun Title After 192-MPH Run

To think that two weeks ago Greg Olson wasn’t even planning to bring his Eliminator Boats 33 Daytona to the Lake of the Ozarks Shootout. And today, the Alliance, Neb., racer clocked a 192-mph top speed, which currently sits atop the Shootout leader board in his twin engine 33-foot cat powered by twin 1,800-hp engines from GT Performance. 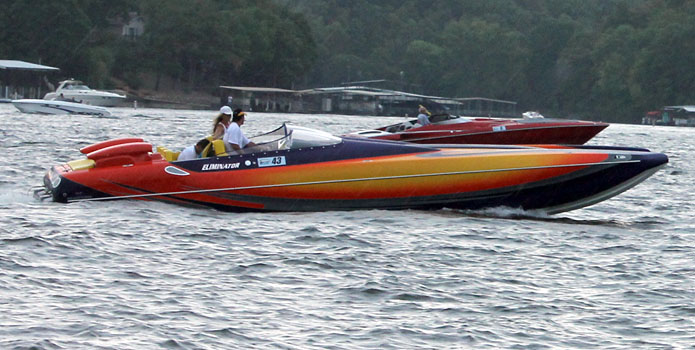 Greg Olson and company idle away from Captain Ron’s after an impressive 192-mph in his Eliminator Boats 33 Daytona with twin GT Performance engines.

A familiar face at the event on the popular Missouri lake, Olson has posted some big numbers before, including a 182-mph top speed a couple of years ago. But crossing the 190-mph barrier, a speed only a few boats have accomplished at the Shootout—especially with piston-driven power—puts him in a class of his own.

“I was amazed at how solid the boat felt at that speed,” Olson said a few hours after the crowd-pleasing run in his boat powered by E-85 fuel. “It didn’t feel how you would expect it to feel like—it was actually a very smooth ride. The boat handled so well. I actually think the boat could go faster safely, It didn’t feel loose at all.

“It was a real fun ride,” he continued. “I’m in there by myself, so I don’t have an opportunity to look at the gauges and see how fast I’m going. I have a communication system in my helmet that is hooked up to my engines so an alarm goes off if anything goes wrong.”

Olson, who has been a regular at the Shootout for eight years, said he wasn’t planning to enter the Shootout this year until he heard about the accident with the turbine-powered Mystic Powerboats catamaran My Way (the event’s defending Top Gun champion, read story here). So he called up his engine builder—Gary Teague of GT Performance—and asked him if he could have the boat ready in time. Obviously, GT Performance made it happen, but not without a few issues along the way.

Olson explained that the engines had a few computer issues over the past few days and even as he entered the starting gate for his first run of the day. But after some computer programming adjustments and getting a better feel for the throttles, he eased it into the run, let the engines spool up and let it fly. The end result was the jaw-dropping 192-mph pass.

“I had decided I’m getting older and my wife gets nervous about me being out there in the boat running these speeds so I wasn’t even going to come,” said the 54-year-old Olson. “Then I heard about the My Way accident a couple of weeks ago and my wife called me and said if I wanted to race one more time, she wouldn’t get mad.

“I have to thank my wife for her support for sure,” he continued, adding that he is officially retired after this event. “I also have to thank Gary Teague and his crew for their hard work. And of course I have to thank my lord and savior Jesus Christ for keeping me safe.”

Olson wowed the Shootout spectator fleet with his 192-mph pass. In fact, he even surprised the legendary Bob Teague, who was commentating on the Shootout broadcast.

“Bob had seen me put up the 180-mph run a couple years ago so it was great to hear that he was surprised by my run today,” Olson added. “I have a lot of respect for him and his knowledge of boat so for me to blow him away really means a lot.”

Although he’s planning to have the Eliminator at the docks in front of Captain Ron’s tomorrow, Olson said he isn’t planning to run again—unless of course someone comes out Sunday and puts up a bigger speed.

“I’m really happy with (192 mph), especially for a smaller recreational boat,” Olson said. “I know putting up that speed is dangerous, but the fans love it. Especially when they see a guy who doesn’t have the same kind of budget as some of these other guys out there. At the same time, I know there’s no use risking myself or the equipment.

“After tomorrow, I’m retired,” he continued. “I told my wife and the gang yesterday, win or lose this is it. It’s nice to go out with such a great speed. I was really hoping for 190-plus mph, but I wasn’t 100 percent sure if the boat had it in it.”

Obviously it did. We’ll see if it’s enough to hold up for the Top Gun trophy.