At this time last year, Oregon Custom Marine (OCM) owner Tim McDonald was scrambling to get his new business—OCM of Lake Havasu—ready in time for the Desert Storm Poker Run. The Arizona lake’s newest performance-boat dealership, a spinoff per se from the Hillsboro, Ore.-based dealership McDonald started in 2001, would soon be hosting the poker run open house in the former Campbell Boats facility, a sizable building in a prime location on the lake. 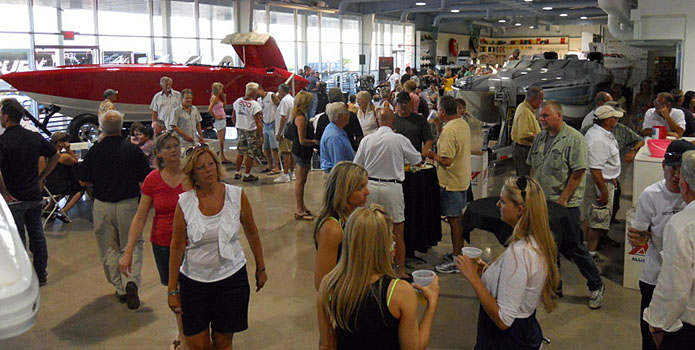 Oregon Custom Marine of Lake Havasu will once again host the Desert Storm Poker Run open house party this year.What a difference 12 months makes. McDonald, who hasn’t officially changed residency but will be relocating soon, said that OCM is going to stock Dave’s Custom Boats (DCB) inventory to complement its lineup of Frisini/Spectre/Sonic models. McDonald also said that he’s also working on a partnership with Barrett Custom Marine to handle the service arm of the business.

“It looks like AJ (Adrian Barrett) will be running the high-performance repair and service center out of the facility,” McDonald said. “It’ll be his own business, but not only will he be able to handle the service, he also can show boats and demo them. It’s a great partnership. It will make us a one-stop shop where someone can buy a boat, service it, detail it and store it.

“With the Frisini product, we’ve got the best of the East Coast available, and adding DCB—the best on the West Coast—is the magic ticket,” he added. “What I have pictured is a high-performance superstore.”

OCM of Lake Havasu has only been open a year, but it’s already established quite a name for itself.A Frisini Motorsports dealer since 2010, McDonald is excited about the company’s new 43-foot catamaran, which will make its debut at the Desert Storm Poker Run (April 25-28), as well as the recently completed 30 Vendetta V-bottom with an open bow. McDonald believes the 30-foot hot rod will be a great seller in Havasu and beyond.

McDonald has high hopes for the Desert Storm open house, which is returning to the shop on Wednesday night with even more industry representation.

“We’ll be inviting all of our friends in the industry to join us, just like we did last year,” said McDonald, who also races and sells P1 SuperStock USA boats. “It’s an open house where anyone can promote their business at no charge. It’s going to be one big party with a lot of cool stuff on display.”