From the tone in John Lovell’s voice, Nordic Boats has hit a homerun with its latest 28 SS catamaran powered by twin Mercury Racing OptiMax 300XS engines. The Lake Havasu City, Ariz., company’s production manager was overjoyed with how the boat performed during a quick break-in run on Lake Havasu last weekend. 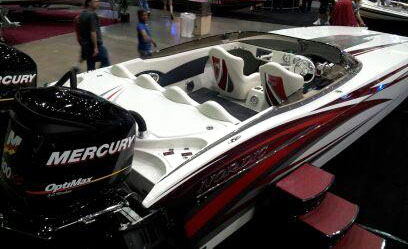 “The boat was absolutely phenomenal,” said Lovell, who called speedonthewater.com this afternoon after setting up Nordic’s booth for the Fred Hall Show, which opened today in Long Beach, Calif. “We ran it up to about 90 mph real quick, but we were just breaking in the engines so we didn’t push it. I’ll tell you what, the boat turns even better with outboards than stern drives. And it’s so quiet—you can have a conversation at 80 mph. The hole shot was great, too.”

Lovell also gave a shout out to the online forum River Dave’s Place (RDP) for initiating the discussion to put a couple of outboards on the back of the 28-footer. A few RDP members suggested that Nordic could sell some boats if they tried outboards. Of course, the idea of putting outboards on a catamaran isn’t innovative, but it did help Nordic realize there was a place in the market for the model after talking to the members and other potential customers.