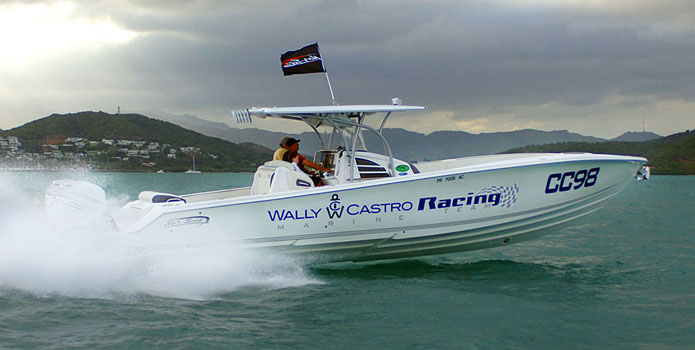 Now tell me this doesn’t sound like an incredible month’s worth of boating: Scot Conrad, a company representative for Nor-Tech Hi-Performance Boats, recently increased his long list of performance-boating experiences with an eventful few weeks that started with the Miami International Boat Show in mid-February.

After handling walkthroughs and demos for the company’s diverse lineup of powerboats, including center consoles, catamarans and offshore V-bottoms in Miami, Conrad drove a new 390 Sport center console in the Florida Powerboat Club’s Miami Boat Show Poker Run. Two weeks later, he headed southeast to Puerto Rico for another boat show and an offshore race. The seasoned racer hadn’t raced in more than five years, but Nor-Tech’s Puerto Rican dealership, Wally Castro Marine, wanted to showcase how well that same 390 Sport that did the poker run could perform in a challenging race environment.

Above photo by Mario Vazquez