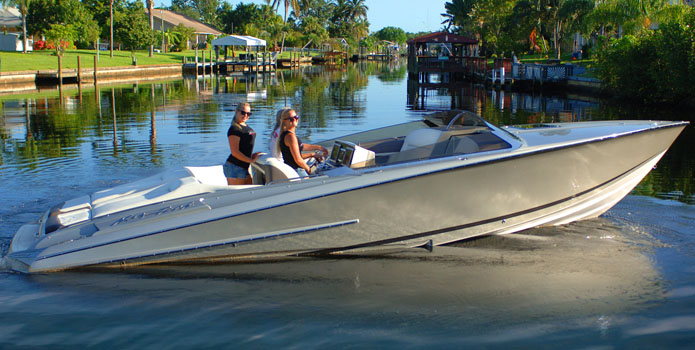 Between the flashy 40 Roadster catamaran with twin Mercury Racing 1100 engines and the quad-engine 39-foot center console with the stylish new deck and console, the Nor-Tech Hi-Performance Boats display at the Fort Lauderdale International Boat Show, which opened Thursday for its preview day and runs through Monday (Nov. 4), is a showstopper.

Between two 34-foot center consoles, a 392 Super Fish and a 298 GT center console, one of the flashiest models of the bunch is the brilliant 420 Monte Carlo with twin Mercury Racing HP700SCi engines and a gold paint job. Yet the 42-footer, which was introduced in late 2011, is likely going to be overshadowed by the debut of its younger sibling—the 320 Monte Carlo.

Designed as a smaller version of the elegant 420 MC that blends classic Mediterranean styling coupled with modern lines and technology, the 32-foot step-bottom boat offers a dry, stable and soft ride thanks to a 10-foot beam, which it shares with its larger sibling. Powered by a single 430-hp MerCruiser 8.2 Mag HO engine, the boat reached a top speed of 65 mph in initial testing a couple of days before the show.

Featuring a similar center-console helm design and cockpit seating arrangement to the 42-footer, the 320 MC has a substantial wraparound windshield that doesn’t take away from the boat’s classic lines while protecting the spacious cockpit. In a unique configuration for a boat of its size, forward aft-facing lounges are located on each side of the sliding door that doubles as a molded staircase for fore deck access and an entrance to the cuddy cabin, which features an enclosed head and a V berth.

Situated behind the two-person helm that includes two large GPS screens is a pair of bench seats separated by a walkway that provides access across the cushioned sun deck to the molded-in swim platform.