With a reported backlog of 20 to 25 center consoles and high-performance boats, business continues to boom at Nor-Tech Hi-Performance Boats in Cape Coral, Fla. That’s the word from Terry Sobo, the company’s director of sales and marketing, who at this moment is on an aircraft heading to the British Virgin Islands for this weekend’s Leverick Bay Poker Run.

“The business is amazing,” said Sobo from his seat on the commercial aircraft, shortly before the doors closed. “In my 22 years in the boat business, I have never seen anything like it. We are slammed with orders. We probably have 15 boats in production and other 20 to 25 that we haven’t even started. 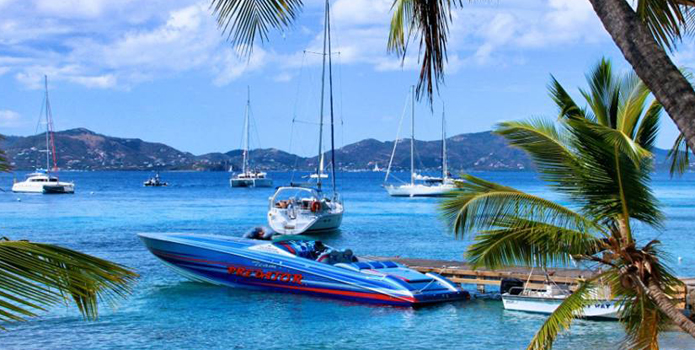 Headed for the British Virgin Islands for a poker run on this Nor-Tech V-bottom owned by Bob Barnhardt, Sobo said business is booming for Nor-Tech.

“If you wouldn’t mind, please let people know we’re looking for experienced riggers,” he added. “We are slammed.”

Sobo said that center consoles continue to drive the majority of Nor-Tech’s sales, with a strong—and welcome—push from the yacht tender market. But he also said the company has seen an upswing in orders for its go-fast catamarans and V-bottoms.

As for the poker run, Sobo said he plans to ride with well-known performance-boat owner Bob Barnhardt in his Team Predator Nor-Tech V-bottom, as well as in one of the company’s new 39-foot center conoles.

“Quite a few of the older Nor-Tech performance boats have ended up in Puerto Rico, so it’s going to be a nice outing,” said Sobo.