When Nor-Tech Hi-Performance Boats introduced the 427 at the Fort Lauderdale International Boat Show in 2010, even Terry Sobo, the company’s director of sales and marketing, was uncertain of how the boat would be received. 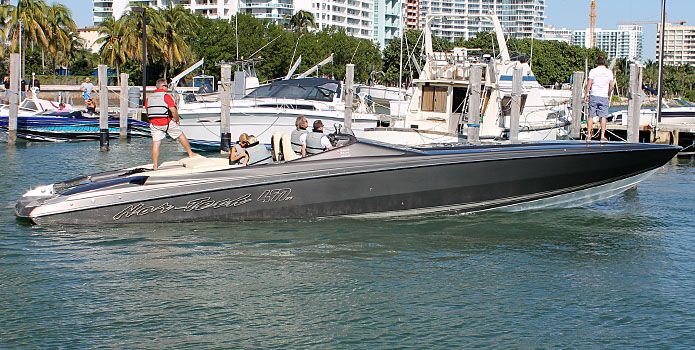 A big hit at the Key West Poker Run in November, Nor-Tech’s stylish and roomy 477 inspired the new 527 V-bottom.

A hybrid of sorts combining the company’s popular 3900 Super V hull with a cockpit modeled after the 4000 Roadster catamaran, the 427 featured center-position steering and helm seats, an elongated cockpit and a redesigned aft end of the boat with a new sun lounge and a larger swim platform.

Now, two years later, the new design is officially a hit. Along with the debut of the new 477 at the Key West Poker Run in November, Sobo said the North Fort Myers, Fla., company is in the midst of building a 43-foot version and will soon begin working on the largest model in the lineup—the 527—for notable poker run enthusiasts, Mark and Eileen Fischer, who own OffleaseOnly.com and BoatsDirectUSA.com.

“I fell in love with the 477 in Key West and have been wrestling with the idea of buying one since the poker run,” said Mark Fischer, who has owned a handful of boats from Nor-Tech, including the iconic 5000V Eileen’s Fifty. “I love the ride of the 50-footer so I told Terry if they could make a 50 like the new 477, I was in. I’m really excited about the new design.”

Fischer and Sobo are expecting the new model, which will be powered with twin Mercury Racing 1350 engines coupled with M8 drives, to make its debut at the 2013 Key West Poker Run in November.

“Just when we thought the (go-fast) market was dead, we’re booked with as many performance boats as we can build right now,” said Sobo, adding that the company’s production for 2013 is still dominated by center console offerings.