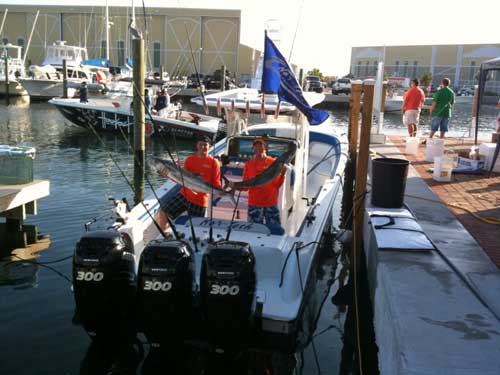 Much as Nor-Tech’s Terry Sobo would like to do a lot more fishing, don’t look for him to give up his day job anytime soon. True, the Cape Coral, Fla., company’s director of marketing did team up with notable offshore racer David Scott and Captain Robert Allen for last weekend’s Southern Kingfish Association tournament in Key West, Fla. But their goal was more about showcasing Nor-Tech’s new 390 Sport Center Console than winning the tourney.

“We caught fish,” Sobo told me earlier today. “But we didn’t catch the biggest one, and that’s how those tournaments work.”

They did, however, catch plenty of attention in the triple-outboard-powered 39-footer.

“Everybody knows us in high-performance, but this was just a whole different group of people with Yellowfins, Contenders and so on,” said Sobo. “They’re like, ‘Whoa, what the hell is that? Isn’t that kinda pretty to take fishing?’ But the boat ran great—on Saturday we ran 77 miles to the first spot and we were the second boat there.

“Sunday was 4- to 7-footers, and nobody hung with us,” he added. “By the end of the weekend, people were like, “That’s a pretty cool boat.”

In more “run-of-the-mill” news—if custom 50-foot-long go-fast catamarans can be called run of the mill—the builder has two 50’ Roadsters under construction. Four 1,200-hp Mercury Racing engines will power one of the cats, which will go to Sheik Hasan of Qatar. The other will be outfitted with a pair of turbine engines.

As if that’s not enough, the company is nearly finished with its second 80-foot yacht.

“You know, the really big stuff has really picked up for us,” said Sobo.

Except for the kingfish.