Your go-to source for performance boating.
HomeIn the NewsNo Turning Back for Miss GEICO 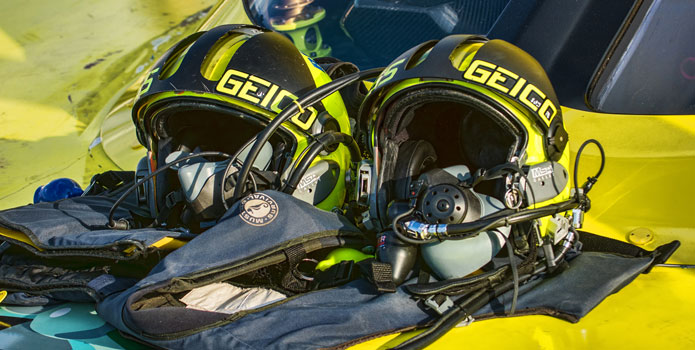 Miss GEICO is the most recognizable offshore racing powerboat in the world. And at least in the United States, it’s also the most popular.

For Scott Begovich and Marc Granet, the men inside Miss GEICO’s cockpit, renowned crew chief Gary Stray (of former UIM Class 1 Victory team glory), and the rest of the team, their boat is the ride of a lifetime.

But it hasn’t always been a smooth one. Three years ago, the team lost its primary financial backer. Last year, its turbine-powered raceboat burned to the waterline. This year, the team is running promising but unproven new Mercury Racing 1650 piston engine power.

The 2013 season could be most pivotal in the team’s eight-year history. And even with an unknown quantity beneath the 44-foot cat’s engine hatches, the Miss GEICO crew has set a high bar.
“Our goal is to win a world championship this season,” says Begovich.

Read the rest of the story in the July/August issue of Speed On The Water digital magazine.