For Skaterfest 2019 organizer Ron Szolack, last weekend’s event in Harrison Township, Mich., will go down as one of the best—maybe even the best—in the event’s eight-year history. First and foremost, Szolack got to spend the weekend with a couple of hundred of his best friends, all rabid fans of the Skater Powerboats brand. The event attracted a 43-boat fleet of new and older Skater cats, which made it among the best-attended Skaterfest happenings to date.

Second, Szolack moved two of his own boats during the weekend, one expected and another a surprise. Szolack knew that Bill Munyan of St. Petersburg, Fla., was coming to enjoy the event and take delivery of his Skater 368. But Szolack didn’t know that Skaterfest first-timer Dave Branton of Louisiana would buy his unique eight-seat Skater 388.

Branton enjoyed the event with his wife, Leeann, his son, Jim, and Rheagan Courville, the younger Branton’s fiancé. He brought his 36-foot Skater, which was formerly owned by Munyon, to the event but the ride proved a bit too breezy for his wife and his son’s bride-to-be. Then they took a ride in Szolack’s 38-footer, which put them in the front row of seats and out of the wind.

Branton, who also owns the famed VOODOO Skater 388 as well as a 48-foot MTI catamaran and an assortment of other powerboats, will take delivery of the eight-seater at the upcoming Lake of the Ozarks Shootout. His friend, fellow Louisiana native and Skaterfest first-timer, Nate Michel, also joined him at last weekend’s event.

“Skaterfest was just incredible and I have to give two thumbs up to Ron,” said Branton. “We came for some different weather and to run in freshwater, and the whole weekend was great. Everybody is so nice and the event is so casual.”

Munyan, his fellow Skaterfest first-timer who also has owned several Skater catamarns during the years and already has his new 368 back in Southwest Florida, agreed.

“Man, it was probably hands-down the most fun event I have ever been to,” he said. “I am going to have to take a week off to recover from it. “

“The way it worked out, buying this new boat from Ronnie, it was almost like it was meant to be,” he continued. “With its wider tunnel and (Mercury Racing) 1100s, which have plenty of power, this boat is by far the best Skater I’ve owned. I think we did only about two or three hours in it in Michigan, but so far it’s been unbelievable.”

To enjoy more images from Skaterfest 2019 check out the slideshow above.

Still another Skaterfest first-timer was Randy Sweers of FB Marine Group, which currently is building its new headquarters in Pompano Beach, Fla.

“Ron has invited me over the last several years and it always conflicted with the Michigan City (Ind.) offshore race,” said Sweers. “But given the opportunity to throttle his new eight-seat 388, I didn’t want to miss the chance. Everyone knows I race an MTI catamaran but I have always loved the Skaters and have sold many of them over the years. And I have to tell you, the wider 388 is probably the best running and handling cat I have ever run—it’s perfectly balanced and plenty fast, even with the 1100s.

“The weather was perfect—the turquoise water was so clear I thought we were running in the Florida Keys or Bahamas,” he continued. “And all the Skater owners are just a great group of guys and girls. Ron puts on a fantastic event. I met up with some old friends, met some new friends and ate some great food. It was pretty much a perfect day for any high-performance powerboat enthusiast. It doesn’t get much better than this.”

Said event first-timer David Branton, “Skaterfest was just incredible and I have to give two thumbs up to Ron (Szolack).” 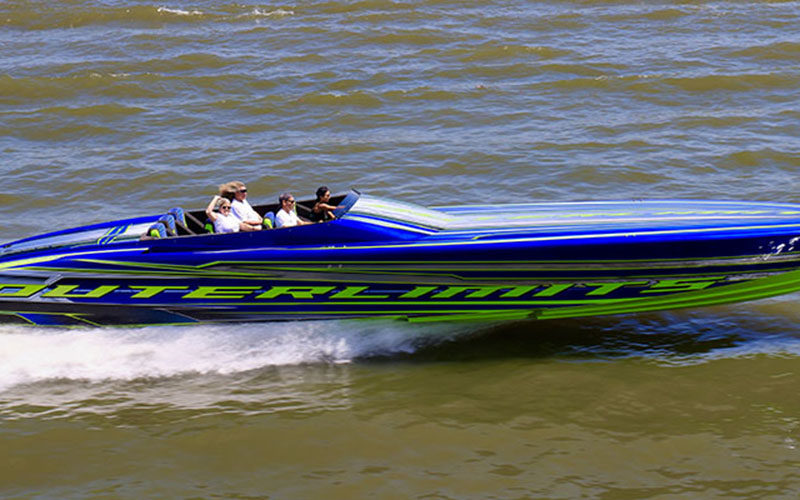