After what National Powerboat Association owner and organizer Billy Frenz called a “four-year sabbatical,” the New York City Poker Run is back and will start at noon this coming Saturday. Down dramatically from its benchmark of a reported 192 boats—the event consistently drew 150 boats in the early 2000s but dropped to 48 boats by 2008 before Frenz discontinued it the following year—the run currently has 20 boats registered. Frenz said he expects 15 to 20 more registrations by the time welcoming party kicks off this Friday night. 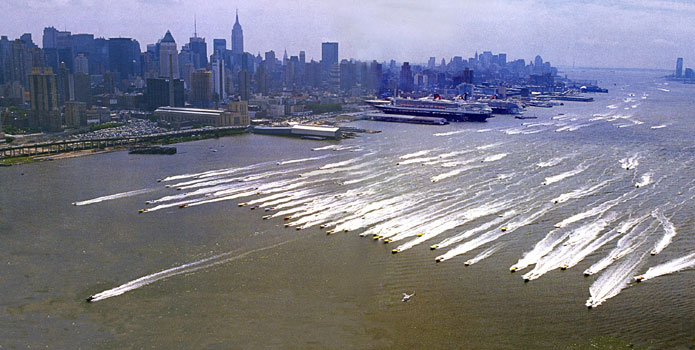 After a four-year break, the New York City Poker Run returns to the Hudson River this weekend.

“I’ll be thrilled with that,” said Frenz. “I based my budget accordingly. I just confirmed my videographer for the helicopter. (Check out this promotional video for the event.) I’ll have one still photographer in the helicopter and four on the course. Running on the Hudson River is so nice—my guys can’t lost.”

The 75-mile run, which has three card stops, begins with a Patriotic Run from the Statue of Liberty to the George Washington Bridge. Speed in that leg is limited to 10 mph. “I hope the guys will be flying their American flags,” said Frenz. “We’ll be passing by the part of the city with the new Freedom Tower in the background.”

Most boats will finish the run by 2:30 p.m. A barbecue and awards party begins at 3 p.m.

Frenz said that he based the return of the New York City Poker Run on having just enough demand.

“I had a nucleus, a handful of guys, who wanted it,” he explained. “My dentist, Dr. Bill Schmidt who has a Skater, kept asking me, ‘When are you going to bring it back? When?’ I had a little bit of support this year, just enough to get my hard expenses deferred, so I decided to do it.

“This may be the start, it may be the finish,” Frenz added and laughed. “I have three other poker runs scheduled for the summer. It will be successful, it’s just that the numbers are going to be 20 percent of what they used to be. But I think that’s the same with the boating industry.”