During its first sea trial in Bristol, R.I., this morning, the new Outerlimits Super Leggera 36 reached a top speed of 99 mph. That’s the word from Mike Fiore, the founder and owner of the Bristol-based custom high-performance powerboat company.

The stepped V-bottom 36-footer isn’t just a new model for Outerlimits. It’s the first boat—outside of Mercury Racing test boats—to be equipped with Mercury Racing‘ new 520 engines, which were released at the end of August. 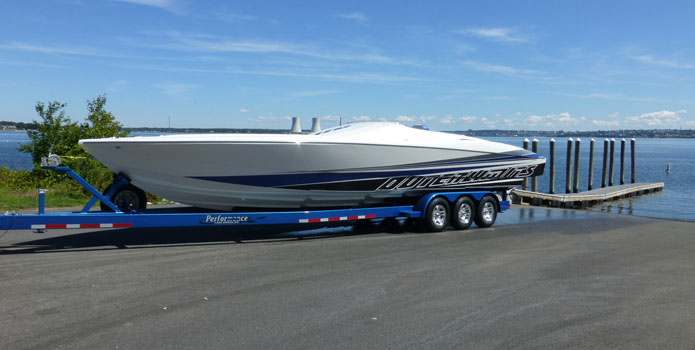 Currently on the road to Kentucky for the Lake Cumberland Poker Run, the Outerlimits SL 36 reached 99 mph in testing today. All photos courtesy Outerlmits

“We were on the rev limiters at 99 mph with 32-inch pitch props,” said Fiore. “Put some 34s on there and it’s a 103-mph boat. It definitely went faster than we expected. It was on rails at that speed, too. You could fall asleep driving it.”

Fiore said he was impressed by the new 520-hp engines, which come standard with the Fond du Lac, Wis., company’s first-ever two-year limited warranty. “The 520 is a great motor,” he said. “Throttle response was tremendous, and the DTS (Digital Throttle and Shift system—standard on the 520) is a vast improvement over the old cable systems.

Set up in staggered configuration, a pair of new Mercury Racing 520 engines provide the power for the 36-footer.

“The new Mercury throttle design is also phenomenal—I can’t say enough good about it,” he added. “The throttle handles are shorter so you can rest your hand on the base and throttle with your fingertips. That will really cut down on driver fatigue. It’s awesome.”

A look inside the cockpit of the first SL 36.

The open-cockpit 36-footer reportedly is on its way to Kentucky for tomorrow’s Lake Cumberland Poker Run, where the public will get its first official view of it.

Said Outerlimits’ Mike Fiore of his company’s latest model: “It definitely went faster than we expected.”

Skater to Offer Entry-Level Cat in 2014