Your go-to source for performance boating.
HomeIn the NewsNew Jersey Radar Shootout on the Table for 2014

When the planning committee for the New Jersey Performance Powerboat Club meets later this month, bringing back the club’s Radar Shootout on Barnegat Bay will be among the motions proposed by Dave Patnaude, the president of the club. Reportedly started in the late 1980s by Rolf Papke of Pro Technologies in Brick, N.J., and Ken Stanley, the once-popular event was discontinued after 2002 when legal issues with surrounding neighbors forced the host venue—the Waters Edge restaurant in Bayville, N.J.—to withdraw. 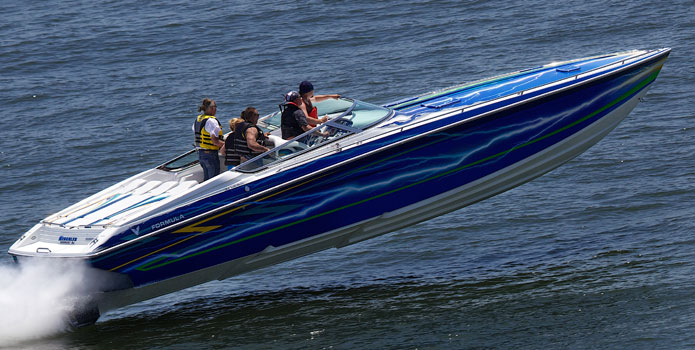 If the Radar Shootout is greenlighted for 2014, NJPPC members will get to find out how their boats can run—in calm water. Photo courtesy/copyright Tim Sharkey/Sharkey Images.

Currently going through interior renovation and under new ownership, the site could be back to host the event in 2014. Patnaude said he approached one of the new owners about having the restaurant return as the host venue and the response was positive and enthusiastic.

“He told me he would love to host the event,” said Patnaude. “I came home, thought about it a bit and then threw the idea out on Facebook, and within an hour people from all over were jumping on it. Ed Smith from the Offshore Powerboat Association called me and said, ‘Hey we worked together in Atlantic City (Read the story) so well, we’d love to get on the radar shootout in some way. Rick Felsen (president of Hawk Race Consultants) called me and said, ‘We can insure it, no problem.'”

While Patnaude said he is optimistic about the possibility of the Radar Shootout returning in 2014, he emphasized that approval from the NJPPC board of directors and planning committee is still necessary. The group will meet at the end of this month.

“We still need to take a vote, and hopefully the motion will carry,” said Patnaude. “One thing we found out around here is that you can’t really have a shootout every year—the boats don’t change enough. So if we do it in 2014, it probably wouldn’t happen again in 2015. It might be two or three years before we do it again.”