Your go-to source for performance boating.
HomeNew ProductsNew 38 MTI Exceeds Expectations All Around 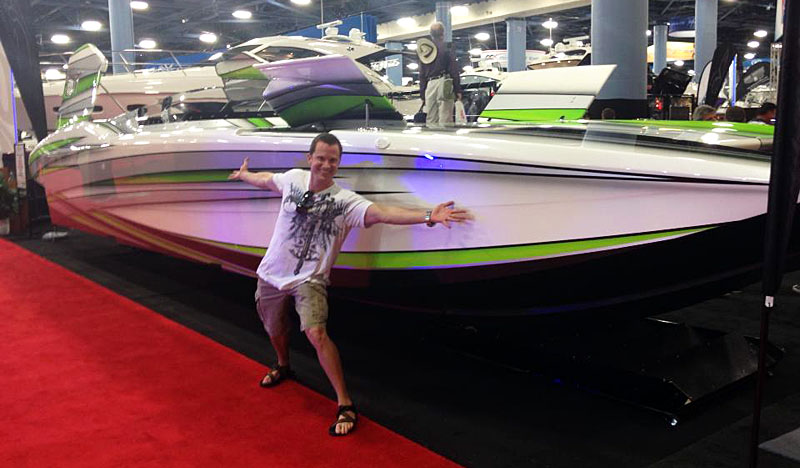 Chatanooga’s Mark Godsey was ecstatic to see his new 38-foot MTI for the first time at the Miami International Boat Show.

After spending a couple of hours on Miami’s Biscayne Bay with MTI owner Randy Scism providing insight, pointers and driving advice regarding the 38-footer, Godsey set out on the Florida Powerboat Club’s Miami Boat Show Poker Run the next day with Pier 57’s Scott Sjogren, his longtime dealer who sold him the MTI.

“The poker run was great, especially with Scott working the throttles for me,” said Godsey, who owned a 2006 Fountain 42 Poker Run Edition before purchasing the first 38 MTI to come out of the company’s Wentzville, Mo., headquarters. “I met some very cool people from Maryland and other places. The boat ran flawlessly and we had such a fun time.

“When people ask me how the boat rides, all I can say is that it’s so nimble and quick,” he added. “It turns so effortlessly and the acceleration with the (Mercury Racing) 1100s is insane. From 60 to 120 mph, the feeling is incredible. The boat is propped for acceleration because that’s what I wanted. Top speed with my setup is about 150 mph—that’s plenty fast for me. We planned to run the boat around 100 mph during the run, but it really wanted to be at 120 to 125 mph, so that’s where we ran it.”

Sjogren had a feeling the six-seat catamaran would be a hit at the show and on the poker run, but even he was blown away by the boat’s performance and versatility.

“All I can say is the new 38 exceeded my expectations in every aspect—fit and finish, performance, paint, everything you could set an expectation for, it is exceeded that,” said Sjogren, not one to throw around compliments like that often. “The boat’s acceleration with the 1100s is unreal, plus it’s absolutely beautiful.” 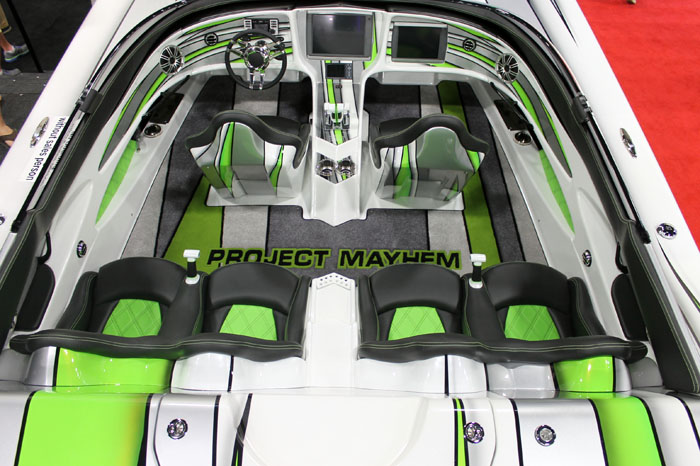 Project Mayhem, MTI’s first 38-footer, is loaded with the latest and greatest from the electronics world and features front seats that slide up for better slow-speed visibility, another MTI first.

Sjogren, who called the boat’s sound and lighting systems incredible, pointed to a variety of new things on the boat that make it “very cool,” from the front seats that slide up to make docking and maneuvering easier to the bussell that extends over the No. 6 drives and doubles as a swim platform with an integrated hideaway pull-out swim ladder. The new model’s precisely designed sun pad, which matches the lime green, white, gray and black paint job done in-house at MTI, is equally impressive and unprecedented.

“Having a ladder and a sun pad were two key points for me,” said Godsey, who plans to run his boat at the Chattanooga Poker Run (May 9-11). “I love doing poker runs, but where I normally boat (Chickamauga Lake on the Tennessee River), we raft up a lot and hang out on the boats and in the water. I told MTI that I really wanted a sun pad and they came up with the drawings, looked at everything and figured out they could make it and sink it down so it was flush. I’m so impressed with how well the upholstery matches the paint.”

Godsey said he’s also been impressed with MTI every step of the way.

“MTI has always been my dream boat so when Scott called me with the opportunity, we talked some numbers and decided to take a trip to MTI,” Godsey said. “After I met with Randy and the rest of the MTI team, it was a no-brainer. They were so accommodating. And for Randy to spend the time with me in Miami like he did, that meant a lot. To sit next to the guy who builds and races these boats was awesome. MTI exceeded my expectations to say the least.”

The first time Godsey saw the boat in person was at the Miami show. He had seen pictures throughout the build process.

“Once I saw all the details, the phenomenal paint job and all the lights on, I was blown away with how well it turned out,” he said. “It was so awesome to see the boat displayed like that. And to have so many people tell me the boat was one of their favorites at the show and at the poker run was such a great feeling.”