In a few weeks, Nordic Boats is expecting to have its first 26 Deck Boat out of the mold. Based off its popular 29 Deck Boat launched a couple of years ago, the new 26-footer will feature the same features as the larger sleek catamaran hull, which is one of Nordic’s best sellers. 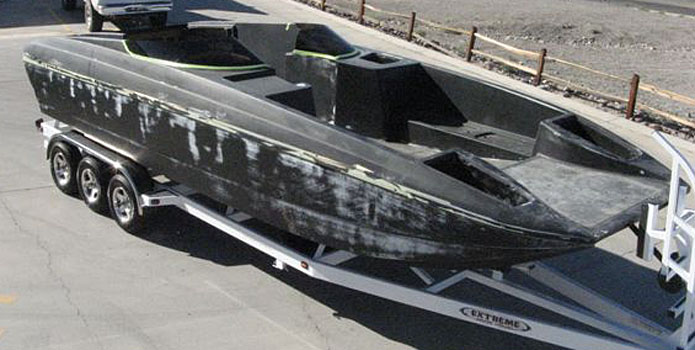 With the plugs and molds complete, Nordic Boats will start production on its first 26 Deck Boat next week.

According to Thane Tiemer, Nordic’s forward-thinking tooler and general manager, the molds for the 26 Deck Boat will be in production starting Monday to begin the gelcoat process. Tiemer, who spent last weekend at Nordic’s Sand and Water Expo display in the company’s own backyard, Lake Havasu City, Ariz., recently completed the plugs for the boat (shown here with windscreens to get a better idea of a complete model).

The first boat will be powered with a 430-hp MerCruiser 8.2 Mag HO and will include split wraparound windscreens, comfortable lounge seats and Nordic’s signature molded swim platform, all highlights of the 29-footer. Basically, Tiemer eliminated three feet in the cockpit area and Nordic continues a trend of going smaller after the release of its sporty 24 SX catamaran in April (see New Nordic 24-foot Catamaran Tops 100 MPH).

“We spent a lot of time going bigger, and now we’ve started going the other way a little,” Tiemer said. “We’ve had a lot of interest in the 24 SX. With the 26 Deck Boat we’re shooting for something a little smaller than the 29 Deck Boat,  which we’ve done really well with, that comes in under $100,000. One thing Randy (Davis, Nordic’s owner) refuses to slow down on is the tooling. His philosophy is when the business comes back strong, we’ll have all new stuff—and that will set us apart from the competition.”