An MTI-V 42 with triple Seven Marine 557 engines earned a lot of attention today at the Dubai International Boat Show. 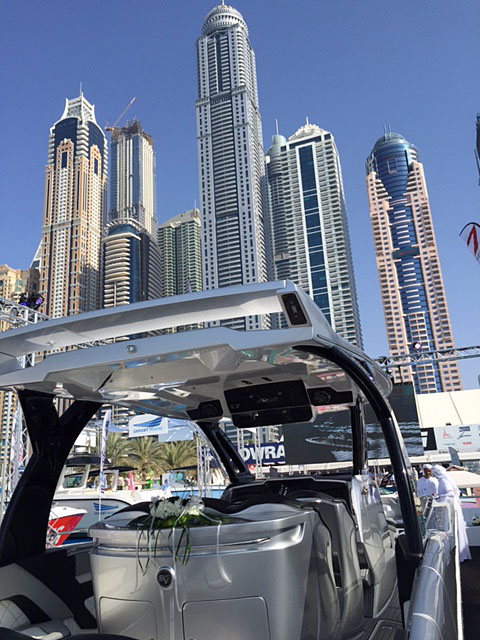 After a taxing few weeks centered around the Miami International Boat Show and the following Miami Boat Show Poker Run organized by the Florida Powerboat Club, Randy Scism—the owner and founder of Marine Technology Inc. in Wentzville, Mo.—packed his bags again and set his sights on promoting the MTI brand at a boat show even further away than South Florida.

Currently in Dubai, UAE, for the Dubai International Boat Show, which runs from March 3-7, Scism e-mailed speedonthewater.com a couple of photos and his thoughts on the spectacular show’s opening day. On display at the Dubai International Marine Club is the company’s only MTI-V 42 powered by triple 557-hp Seven Marine outboard engines (click here to read about the 42-footer’s first test session on Missouri’s Lake of the Ozarks). And according to Scism, the stunning silver and black model drew plenty of attention at the 23rd annual show.

“One of our clients here was nice enough to let us display the 42 with Seven Marine engines,” said Scism, adding that he enjoyed visiting with the locals and several dignitaries today. “The boat is an 80-plus-mph center console that runs as good as it looks. The MTI-V 42 has been well received at the show so far.”

Want to read more about the MTI-V 42? Check out the feature on the company’s hot 42-foot model in the November/December issue of Speed On The Water magazine. Download it for free right here today.