If all goes as planned, the highly anticipated SV42 center console from Marine Technology Inc. (MTI) will make an appearance at the Lake of the Ozarks Shootout this weekend for a handful of customer demo rides on the popular Missouri waterway. 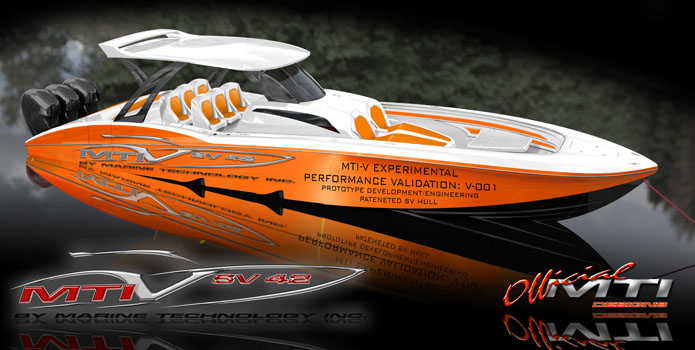 This is the latest rendering of MTI’s new SV42 V-bottom that the company plans to take to the Lake of the Ozarks Shootout this weekend.

After a couple of months of testing the brand-new 42-foot V-bottom with triple and quad-engine configurations from Mercury Racing, MTI owner Randy Scism said the crew has been working around the clock at the Wentzville, Mo., shop to get the boat in demo-ready form.

“Right now there is nothing in it,” Scism said on Monday, adding that there’s been at least one person at the shop 24 hours a day for the last two weeks prepping the center console and other customer boats for the Shootout. “This week, we’re going to drop in a cabin liner, then the console, then the seats and then the roof. Then we’re going wrap it with vinyl—it’s going to say Performance Validation Vessel: V-001 on it—and make it to the Shootout by the end of this week. That’s the plan at least.”

Scism added that the initial testing on the boat has exceeded his expectations, as well as everyone else’s who has ridden in the boat. He’s excited to be able to take some potential clients out for rides this weekend.

“It’s obviously still a validation boat, but at least people will get a feel for how big the boat is and how it looks and runs,” Scism said. “So far it’s running great. The handling is impressive considering it’s 42 feet and has an 11-foot beam. It’s nimble yet big enough to take anything you put in it.”

Speedonthewater.com will bring you live photos and coverage from the Shootout festivities this weekend. Also, via your smartphone or online, you can watch the live broadcast from the event on Saturday, Aug. 25 and Sunday, Aug. 26 at www.stickam.com/shootout.